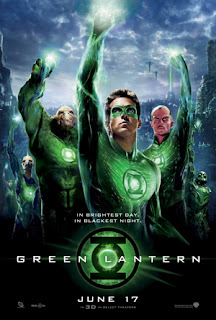 In GREEN LANTERN, the titular hero's emerald energy projections are limited only by his willpower, which means Hal Jordan can generate solid green "constructs" with moving parts, including rocket launchers, machine guns, drills—and stock cars that zip along a life-size Hot Wheels track.  Gone are the simplistic, giant jade fly-swatters and baseball bats he favored in the old Super Friends cartoon.

Purple-blooded Abin-Sur (Temuera Morrison) crash lands in , badly wounded by a fear-mongering cosmic octopod called Parallax.  Abin-Sur is one of many noble intergalactic peacekeepers comprising The Green Lantern Corps, and his power ring has selected as his replacement (Sector 2814 is the assigned “beat”).  Hal's convinced it’s a mistake, but he’s whisked into space for Lantern boot camp with fish-faced Tomar (Geoffrey Rush), crusty Kilowag (Michael Clarke Duncan), and the Machiavellian, mustachioed Sinestro (Mark Strong).  Carol remains Hal’s cheerleader on Earth, giving pep talks and assuring him his father’s brand of courage is precisely what the Corps needs.

Meanwhile, weaselly Dr. Hector Hammond (Peer Sarsgaard) is infected while conducting an alien autopsy.  Hector’s cerebellum swells badly, but he develops extraordinary psionic powers—which the senator’s son uses to hassle Hal, whom he’s always envied.
Sinestro doesn't like either.  He thinks humans are too un-evolved for the Corps and pleads as much to his bosses, the Ancient Guardians of Oa.  When that’s not enough, Sinestro—wary of the Parallax threat—literally takes matters into his own hands by forging a yellow ring, to “fight fear with fear.”  Comic fans know where this is going.
Director Martin Campbell (EDGE OF DARKNESS, CASINO ROYALE) has done for DC’s Green Lantern what Jon Favreau did for Marvel’s Iron Man, transforming what was arguably a B-List hero into an A-Team marquee star and marketable cash cow kids now idolize (and wear, eat, sleep on, collect, etc.).  Campbell’s no newbie when it comes to origin plotlines; the ZORRO auteur is expedient with exposition and cuts quickly to the noisy, beautiful action—which  includes an eye-popping showdown between Hal and Hector in a laboratory, and a nail-biter pitting Jordan against Parallax on Earth—in the crowded city—where a few bystanders actually die.
The film's strongest moments derive from Hal’s fascination with (and frustration over) his new abilities.  Credit Reynolds with striking the proper balance of smarminess and solemnity.  He hasn't the gravitas of Robert Downey, Jr.-- even with similar paternal problems, Jordan just isn't as severe a character as Tony Stark.  He's younger, more impulsive, a bit naive.  He bungles the Lantern oath, jumbling the Pledge of Allegiance with Buzz Lightyear platitudes.  The writers joke up front about the woeful inadequacy of Hal's mask to disguise him (although it does turn his eyes from Pound Puppy brown to ice blue), while acknowledging that having such powers would indeed be awesome.
“Dude, you’re a superhero!” gushes Hal’s wide-eyed engineer pal.
Those who can’t get over the multitudinous (and obvious) CGI effects should ask themselves: How else would an enchanted green power suit from space look?  This protagonist’s premise is preposterous to begin with, so just sit back and enjoy the ride. In brightest day and blackest night, GREEN LANTERN is big, dumb, and fun all over—and makes effective escapism because it knows this.  2 ½ out of 4 stars.
Posted by Peter M. Roche at 12:01 AM