Circo (June 9th and 11th at the Cleveland Cinematheque) 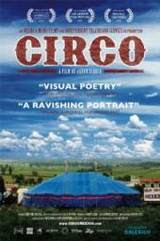 I haven't been up to speed; did anyone buy tickets in any quantity to see WATER FOR ELEPHANTS? Anyone? Oh well. One wonders if First Run, the artsy releasing entity for the documentary CIRCO might have had the notion that WATER FOR ELEPHANTS fever might sweep the Free World, with audiences clamoring for any bluesy view of life under the big top of a struggling circus. Because that's what the nonfiction CIRCO is all about, even if the vibe is not much like the Sara Gruen novel and Reese Witherspoon pachyderm picture.

With circus-folk interviews mixing melancholy, bravado and local color about their chosen (or abandoned) profession, CIRCO follows the itinerant Circo Mexico, a small-time circus that rambles around the village circuit of Mexico – the acts aren't good enough to make it in the big cities, ringmaster Tino Ponce admits.


Circo Mexico is family-run by every definition; it turns out it is one of four separate barnstorming circuses, each managed by a different brother of the deceased family patriarch of the Ponce dynasty and starring their own gypsy children as major acts. And it does seem that the menfolk have the circus life in their blood - far more so than the women. A few Ponce sisters, once celebrated performers, have had enough and settled in towns. For the women who marry into the Ponce trailer-household, adapting to life rootlessly on the road, the conflict between having the daughters educated or letting them grow up to be illiterate contortionists and acrobats, proves arduous and [SPOILER ALERT] nearly impossible.


Relationships going sour in fact, constitute the spine of the narrative. Ivonne, a townswoman who defiantly left her scandalized family to marry ringmaster Tino has, by the end, blown up against Tino's manager-father and departed, taking the smallest kids. An acrobat Ponce brother, said to be tragically naive and inexperienced with females, quit the act to marry a "loose" woman much older than he and settle in a town, and that doesn't end well either. Yet girls still are drawn irresistibly to one of the young-adult nephews, a well-muscled boy who enjoys leaving behind a lover or two in every town visited (must be the sum total of that famous pamphlet "How To Pick Up Girls: Be a trapeze artist"). And the picture ends on a note of the next generation taking over the circus' assorted pleasures and burdens - not unlike that Sonny & Cher hit about the gypsies, tramps and thieves. (3 out of 4 stars)
Posted by Charles Cassady Jr. at 12:01 AM