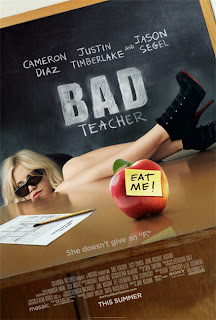 As if to fill the void in summer raunch left by the disappointing HANGOVER sequel, BAD TEACHER, directed by Jake Kasdan, brings us Cameron Diaz as the sleaziest middle-school teacher in the history of education.
There is a certain wicked pleasure in beholding Diaz’s unregenerate misanthrope, whose character is mildly reminiscent of Billy Bob Thornton’s BAD SANTA in its twisting of traditional expectations. How, and why, did this woman ever become a teacher? The character, Elizabeth Halsey, edging over the hill but still gorgeous, stalks the corridors of the Illinois school where she scarcely works, wearing five-inch slides and tight skirts, hung over from booze and bonging, dozing while she feeds her students – whose names she can’t be bothered to learn — a pedagogical diet of school-themed movies (STAND AND DELIVER, LEAN ON ME). She is crass, mean, profane and callous to other people who aren’t wealthy, eligible men. Her plans to leave her hated job for marriage are foiled when her oblivious, opera-obsessed fiancé dumps her after his mother discovers she’s spent tens of thousands of his dollars.
The engagement ended, and demoted from a Mercedes Benz to a cheap compact car, she angrily returns to the school for another year, determined to continue her indifferent teaching until she finds a rich guy to take care of her. Her sole problem, she determines, is that her breasts are too small, so she does everything she can to scrounge money for breast enhancement surgery (it’s illustrative of the movie’s style that she saves the money in a jar labeled “NEW TITS”).
The schemes include accepting bribes from ambitious parents for “supplies” and “special tutoring” and pocketing the proceeds from a seventh-grade car wash – enhanced by her appearance in MTV-model halter and shorts, which drives men and boys mad and sends police cruisers a-crashing. She also sets her sights on nerdy but well-born substitute teacher Scott (Justin Timberlake, a former Diaz paramour, for those who follow such things). Like many things in this movie, Timberlake’s character is a little underdeveloped, but he has a great moment performing a hilariously bad love song he penned with the movie’s writers, Gene Stupinsky and Lee Eisenberg.
’s rival for Scott’s affections, as well as for a lucrative teacher’s bonus for student performance on a statewide test, is the hyper-cheerful, amusingly named Amy Squirrel (Lucy Punch). With the promise of a $7,500 check, transforms herself into the world’s most demanding teacher, catechizing students on To Kill a Mockingbird by throwing gym balls at their faces when they give the wrong answers. While scheming to outwit Amy and win Scott and the cash bonus, manipulates her introverted, overweight colleague Lynn (Phyllis Smith) and rebuffs the attentions of gym teacher Russell (Jason Segel), the only person in the school who’s wise to her ways and likes her anyway. Segel, familiar from Judd Apatow’s FORGETTING SARAH MARSHALL and I LOVE YOU MAN, brings a welcome touch of affable, Apatovian sardonicism, like when he gently suggests might be better suited to another profession: “Like, any other job in the entire world.”
In a scene that represents a fantasy for many a teacher, marks her browbeaten students’ papers in large red letters: “Stupid!” and “Are you fucking kidding me?” The BAD TEACHER script earns higher marks, though it does suffers from a certain lack of cohesion and consistency. Ideas and characters are introduced, like the family of a sensitive, poetic boy student (including Molly Shannon as his mom), that serve no discernible purpose, and the humor is sporadic and not always of the highest quality. But it does have a pleasantly shaggy quality, a dark, amoral tone that is very appealing during the superhero-cum-cartoon summer season, a well-chosen soundtrack (Judas Priest aptly captures ’s attitude), and Diaz, whose zesty performance gives the finger to the mindless Web chatter about her being “past it” (at 38!). 3 out of 4 stars.
Posted by Pamela Zoslov at 12:01 AM