Applause (June 9th and 10th at the Cleveland Cinematheque) 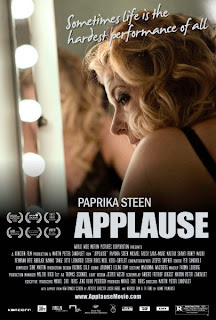 Some people probably shouldn't have kids. Actress Thea Barfoed (Paprika Steen) is one such person. Her alcoholism has put her children in danger in the past, and even after a stint in rehab she doesn't exactly come across as mother of the year material. In fact, her main interest in the children seems to be more about what they can give to her emotionally than anything she can do for them. Nonetheless, Thea's ex-husband Christian (Michael Falch) wants the kids to know their mother, and warily agrees to let her see them.
Although she may not be a good parent, Thea's fame and snippets we see of her performing the role of Martha in Who's Afraid of Virginia Woolf? indicate that she is a good actress. Because of that, we're never really sure if we're seeing the real person, or Thea playing another role to get what she wants, as when she appears to hit it off with her ex-husband's new wife Maiken (Sara-Marie Maltha). The kids, for their part, aren't so sure they want to see their mother. But Thea is bound and determined to not only be a part of their lives, but to regain custody. At the same time she's fighting for her kids, she's also fighting loneliness and the urge to start drinking again.
Thea is selfish, irresponsible, and at times downright cruel. She knows she is nearing the end of her fame and fortune without any real human connections to fall back on, and it scares her. That's why she's so desperate to make her children love her. Ultimately, though, she will have to choose between her own selfish needs and the needs of her kids. Steen's performance in this role is excellent, accomplishing the difficult task of making us care about a pretty unlikeable character. We don't particularly want to see her succeed in her quest to get her kids back, but we do at least feel some empathy for her.
Director/co-writer Martin Pieter Zandvliet shoots APPLAUSE in an simple, almost documentary style. It's not quite Dogme 95 (the non-diagetic music alone would disqualify it), but it has some of that feel. Although to a large degree the film is a character study, it's also satisfying on a story level. The themes are strong and well defined, and the ending resolves them in a wholly satisfying manner. 3 1/2 out of 4 stars.
Posted by Bob Ignizio at 12:01 AM