13 Assassins (July 1st and 2nd at the Cleveland Cinematheque) 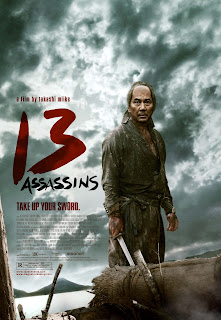 Takashi Miike is probably the most prolific movie director working today outside of Spanish exploitation film legend Jesus Franco or the porn industry. Since 1991, he's amassed over 80 directorial credits on IMDB, with 8 titles in 2002 alone. Miike has slowed down a bit since then, only finishing two movies in 2010 including this one. A straight forward samurai epic with a sizable budget, 13 ASSASSINS (Jûsan-nin no shikaku) is a bit of a departure from the more personal and outré low budget quickies like AUDITION and VISITOR Q Miike is best known for.
The plot hinges on a real nasty piece of work by the name of Naritsuga (Gorô Inagaki). This is not a villain with shades of grey; this guy is rotten to the core. By the time Sir Doi (Mikijiro Hira), sort of an enforcer of samurai code, gets done relating all of Naritsuga's past misdeeds, we're rooting for someone to take him out. Doi would like nothing better, but his hands are tied: Naritsuga is the younger brother of the shogun, and thus untouchable. Doi decides his only option is to secretly hire samurai Shinzaemon (Kôji Yakusho) to assassinate the sadistic warlord in a way that will leave no evidence pointing back at him.
As the film's title suggests, Shinzaemon eventually assembles a dirty baker's dozen of warriors. Most are samurai, but Koyata (Yûsuke Iseya) is a hunter who serves much the same purpose here as Toshiro Mifune did in SEVEN SAMURAI; namely to show that the common man has as much worth, if not more, than any samurai. While these men are indeed a force to be reckoned with, Naritsuga is accompanied by 70 samurai of his own, so it will take careful strategy rather than brute force if the assassination plan is to succeed.
13 ASSASSINS is a solid work of entertainment, a straight forward tale of good vs. evil with plenty of action and rivers of gore. Miike stages some thrilling action sequences without losing sight of the reason his broadly sketched characters are fighting. We've got a hateful villain, an honorable hero, and the fate of a nation at stake, and that's enough to keep us emotionally invested as we watch the heavily outnumbered assassins get closer to their goal, even as their losses begin to mount. It's not on a par with Akira Kurosawa's swordplay epics like SEVEN SAMURAI or YOJIMBO, but then not many films are. 3 out of 4 stars.
Posted by Bob Ignizio at 12:01 AM