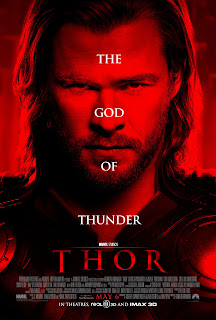 Thor makes for an interesting departure from the usual super hero formula. He has no secret identity, and no need for an origin story or any pseudo-scientific explanation for how he got his powers. He's purely and simply Thor, the God of Thunder we know from Norse mythology. Or to be more precise, the immortal alien being the Vikings once worshiped as such, dodging any possible theological issues the character might otherwise raise.
As played by Chris Hemsworth, Thor is something of an arrested adolescent who isn't happy unless he's fighting or partying, He's arrogant, rash, and certain he knows better than his father Odin (Anthony Hopkins), who Thor will one day succeed as ruler of the Asgardians. Thor mistakes his father's caution and thoughtfulness for cowardice. With a little subtle nudging from his brother Loki (Tom Hiddleston), he openly defies Odin by breaking a truce with another race of immortals known as frost giants. Odin contains the mess as best he can, but realizes his progeny needs to be taught a lesson in humility. To that end, he strips Thor of his powers and sends him to earth.
On Earth, Thor is taken under the wing of scientist Jane Foster (Natalie Portman)and her fellow researchers Erik Selvig (Stellan Skarsgard) and Darcy Lewis (Kat Dennings). They think the guy is crazy, but in a likeable sort of way. Plus there's probably a little guilt about running him over with their truck. Thor's hammer Mjolnir also arrives on earth. Taking a page out of Merlin's book, Odin has stuck the weapon in stone and enchanted it so that only one who is “worthy” may pick it up and thus possess the power of Thor.
I don't think it's any shock that the worthy individual turns out to be Thor himself, at least once he learns his lesson. What might be surprising is how enjoyable the scenes of Thor going through that process, and learning to respect and care for humans, are. Not unlike the IRON MAN movies, it's these kind of character-driven scenes that make for a movie and a hero that audiences can relate to even if they aren't superhero fans.
Director Kenneth Branagh is best known for his Shakespeare adaptations and other classy films starring British people, but he proves more than capable of making a fine summer popcorn movie, too. Branagh probably goes a bit overboard with the special effects and sound design at times, but at least he does a good job with the pacing and flow of the film, spending time on plot and character so the action scenes actually mean something.
You really couldn't ask for a better Thor than Hemsworth. He's in amazing shape without being so huge that he looks like a refugee from the WWE. Even when he's playing arrogant and obnoxious early in the film, he still manages to be likable. Hiddleston's Loki is the classic villain you kind of feel sorry for but still want to see get his ass kicked. Hopkins, for his part, must have enjoyed working with Branagh and the cast. Unlike recent roles where he seemed to be phoning it in (THE WOLFMAN), he seems to be having a good time here. Portman makes a strong, smart and charming love interest for the God of Thunder, even if she ultimately is little more than an observer once things start cooking.
The themes here are all pretty straightforward and simple: sons wanting to earn the love and respect of their father, the rivalry between brothers, the perils of pride and vanity, the value of wisdom. All of that is wrapped up in a fun story with plenty of action and even a little romance. What more do you want out of a summer movie? 3 out of 4 stars.
Posted by Bob Ignizio at 12:01 AM