[Oops... this film screened at the Cleveland Cinematheque Friday May 27th and Saturday May 28th, but we missed posting the review. That said, the movie is so good we want to let you know about it so you can track it down when it eventually comes out on home video.] 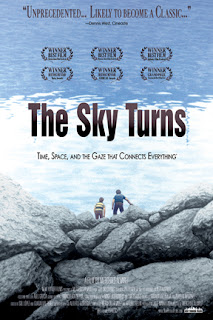 Inspired by the work of a painter who is now slowly losing his sight, director Mercedes Alvarez returns to Aldealseñor, the small Spanish village of her birth, to act as a witness to its dying days. No one has been born in the village since Alvarez, and only a handful of senior citizens remain, relying on the bread man and the frozen food man who make their deliveries less and less frequently for supplies. It may not sound like much, but what Alvarez captures on film in her documentary THE SKY TURNS is spellbinding.


In what feels like a something out of an absurdist comedy, a pair of Socialists come into town a few times to paste up election posters, the speakers on the roof of their car blaring political slogans through the mostly empty streets. Aside from that, we merely watch the remaining villagers go about their days.
The site where Aldealseñor stands is near some rather impressive fossil finds, including a set of nicely preserved dinosaur tracks. Also nearby are the remains of an older, long abandoned settlement whose population chose suicide rather than submit to the terms of surrender offered by the Romans. Now the village that Alvarez knew is joining them in extinction, although an old Moorish castle in town may be resurrected as a 5 star hotel that none of the villagers could ever afford to stay in. But in the end, individuals, towns, civilizations, even entire species of creatures; all come and go while the earth remains, largely unimpressed by it all.
Yes, the film is slow moving, but it creates a feeling of eerie nostalgia that, if you just let it, you can lose yourself in. Alvarez captures some truly beautiful moments with her camera, often early in the morning as fog covers the ground. She also records some charmingly quirky conversations about mortality, the possibility of colonizing other planets, and the justification or lack thereof for George W. Bush invading Iraq (part of the film was shot just as the Iraq War was beginning) that may or may not have been entirely unstaged. Like some of Werner Herzog's documentaries, I think she's trying to get at a deeper truth here, and if that means occasionally manipulating people and events in front of her camera, then so be it. 4 out of 4 stars.
Posted by Bob Ignizio at 12:14 AM