Rubber (May 27th and 28th at the Cleveland Cinematheque)

[RUBBER screens Friday May 27th at 7:40pm and Saturday May 28th at 9:20pm at the Cleveland Cinematheque.]
Review by Bob Ignizio 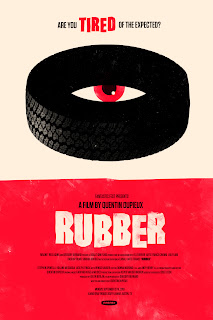 A police officer, who has just gotten out of the trunk of a car, explains that things often happen in movies for “no reason”. This is the opening scene of RUBBER, a film that aims to take the concept of “no reason” as far as it possibly can. There is no reason why a tire suddenly gets up off the ground and starts rolling down the highway with murderous intent. There is no reason why said tire has the power to explode people's heads ala SCANNERS. There is no reason why a group of spectators have gathered to watch the tire's rampage from a distance using binoculars. Nor is there any reason why they don't just pack up and leave instead of suffering hunger and hardship like the party guests in Luis Bunuel's THE EXTERMINATING ANGEL.


It is that same sense of absurd surrealism that characterized much of Bunuel's work that writer/director Quentin Dupieux is aiming for here. But where Buneul used surrealism to comment on the church, bourgeois values, and other socio-political issues, Dupieux is just having a laugh. But as long as you're willing to accept the premise, enough funny things happen for “no reason” to keep RUBBER rolling merrily along like its killer tire.
As silly as the film gets, the cast plays it absolutely straight. B-movie favorite Wings Hauser is arguably the biggest name here, playing a stubborn wheelchair-bound audience member who refuses to stop watching the “movie”, thus forcing it to go on to some kind of conclusion. Veteran TV actors Stephen Spinella and Jack Plotnick both stand out as the trunk-riding police officer and an accountant, respectively, and Roxane Mesquida looks lovely and isn't really called on to do much more than that.
To be sure, RUBBER is a lightweight affair whether you look at it as arthouse experiment or horror comedy. That said, it's made with both skill and an infectious enthusiasm. And with a running time a little less than an hour and a half, the movie is over before its artifice wears too thin. 2 1/2 out of 4 stars.
Posted by Bob Ignizio at 12:01 AM