Repost: Kaboom (May 12th and 14th at the Cleveland Cinematheque)

[KABOOM screens Thursday May 12th at 6:45pm and Saturday May 14th at 11:45pm at the Cleveland Cinematheque.] 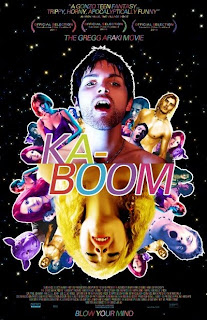 After seemingly “maturing” as a filmmaker with the excellent sexual abuse drama MYSTERIOUS SKIN, director Greg Araki has regressed a bit. Apparently we have John Waters to blame/thank for this, as he put the notion in Araki's head to make another film more like early works such as THE DOOM GENERATION and NOWHERE. And so he has, although KABOOM has the advantage of everything Araki has learned as a filmmaker since. He's still trying to generate laughs and pan-sexual eroticism while shocking and offending polite society, but now he does it with more skill and confidence.
The film centers on sexually “undeclared” college student Smith (Thomas Dekker). As his 19th birthday approaches, Smith begins having strange dreams that he intuits must have some kind of meaning. When his lesbian best friend Stella (Haley Bennett) introduces him to her latest girlfriend, a powerful witch named Lorelei (Roxanne Mesquida), Smith immediately recognizes the girl from his nightly visions. Another of Smith's dreamland players is at the party as well; a mysterious red-haired girl (Nicole LaLibierte). Later that night, and while Smith is under the influence of some kind of hallucinogen, he and the redhead are attacked by three men in animal masks. While trying to figure out all the strangeness in his life, Smith also finds time to fool around with pretty blonde girl London (Juno Temple) while pining for his dumb surfer roommate Thor (Chris Zylka) and Thor's pal Rex (Andy Fischer-Price). Meanwhile, Lorelei turns out to be a bit of a psycho who unleashes her black magic powers on Stella after being dumped.
KABOOM is a candy-colored buffet of carnality mixed with supernatural weirdness, secret societies, and deadpan campy humor. If the plot sounds convoluted, that's because it is. But don't worry, it really doesn't matter that much. This is like a Russ Meyer movie if Russ Meyer had been gay (a notion almost as far-fetched than anything actually in this film). As with Meyer's oeuvre, plot is just a means to an end, a framework to give structure to the sex scenes, outlandish gags and visually stunning set pieces. It does make a kind of sense, and Araki absolutely ties up all his loose ends by the final shot, but it doesn't really add up to much in the end, at least if you're looking for a movie that “says something”. Still, provided you're not offended by the film's blasé attitude towards sexual acts of all kinds and orientations, it's a fun ride getting there. 3 out of 4 stars.
Posted by Bob Ignizio at 12:01 AM