Repost: The Girl Who Kicked the Hornet's Nest (May 18th at the Cleveland Museum of Art)

[THE GIRL WHO KICKED THE HORNET'S NEST screens Wednesday May 18th at 5:30pm at the Cleveland Museum of Art.] 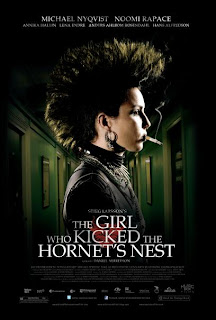 THE GIRL WHO KICKED THE HORNET'S NEST concludes the story of Lisbeth Salander (Noomi Rapace) that began with THE GIRL WITH THE DRAGON TATTOO and continued in THE GIRL WHO PLAYED WITH FIRE. Over the course of the films collectively known as the Millennium Trilogy, Lisbeth has endured just about every form of abuse one can imagine. Not only has she survived, you almost feel sorry for the people who were foolish enough to mess with her. When it comes to revenge, this girl doesn't mess around. To some, that makes Lisbeth a feminist heroine. To others, these movies are nothing more than exploitation films that revel in violence against their heroine, then try to justify it by having her triumph over her attackers in an arthouse equivalent of I SPIT ON YOUR GRAVE. I can see both points of view. No doubt the many years I've spent watching horror and exploitation films has contributed to my own somewhat jaded opinion that, either way, these are well made and entertaining films, and this latest is no exception.
Lisbeth is still very much the focus in this latest installment, but this time around her friend and former lover Mikael Blomkvist (Michael Nyqvist) has to shoulder much more of the action. That's because Lisbeth is recovering from multiple wounds she received at the end of the last film while awaiting trial for attempting to murder her abusive father Alexander Zalachenko (Georgi Staykov). The events of the previous film have flushed out the remaining members of the conspiracy that protected Lisbeth's father, and they are determined to cover up their crimes and silence Lisbeth by any means necessary. It's a race against time for Blomkvist to put together the evidence necessary to clear Lisbeth's name and make the real villains pay.

All three films in the series have their own unique slant. The first, GIRL WITH THE DRAGON TATTOO, was rooted in conventional murder mysteries. The second was more pulpy and action oriented. This time around, we've got a political conspiracy thriller for the first two thirds of the running time followed by a courtroom drama. That makes for a somewhat slower paced film that does drag a bit at times.  Those issues of pacing make THE GIRL WHO KICKED THE HORNET'S NEST a somewhat lesser film than its predecessors, but it nonetheless offers a satisfying conclusion to the series.
3 1/2 out of 4 stars.
Posted by Bob Ignizio at 12:01 AM