Repost: Enter the Void (May 7th at the Cleveland Cinematheque)

[ENTER THE VOID screens Saturday May 7th at 8:30pm. This is the uncut version of the film, which runs 20 minutes longer than the version that played the Cedar Lee back in December. This review is of the shorter version.] 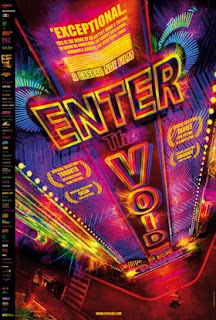 When small time drug dealer Oscar (Nathaniel Brown) gets gunned down in a bathroom stall by the police, his mind/spirit embarks on a journey to find a new home. Like Robert Montgomery's experimental noir film Lady in the Lake (1947), Enter the Void is shot entirely from a subjective point of view. We see everything through Oscar's eyes at first, and then from a completely unanchored “eye of god” point of view once he becomes free of his body. In showing this, at times director Gaspar Noé jerks and spins his camera around in such a way that he seems to be trying to make his audience nauseous.
Noe uses The Tibetan Book of the Dead as his template for Enter the Void. Oscar gets to see his life flash before his eyes, witness what happens to those he cared about, and at times even see inside their heads. It could be a genuinely profound spiritual experience, or it could be, as Noé himself says, just the dying dream of a druggie who recently finished reading The Tibetan Book of the Dead and took it to heart. But while artists may have one intent in mind, once their work goes out in the world it becomes subject to the interpretation of others. In this case, either interpretation works just as well.
I found Noé's previous film Irreversible (2002) all but unwatchable. Even more than here, the director seemed determined to annoy his audience. In addition to the spinning camera routine, the soundtrack was specifically designed to create unease in viewers. The film began with a brutal murder, and centered on an extended rape scene that refused to blink. There's never any doubt with Irreversible that you're watching a director with considerable skill and something of substance to say, but Noé also seems to be going for cheap shock value at times. There's a little bit of that in Enter the Void, as when we see a close-up of an aborted fetus, but overall Noé seems to have mellowed a bit.
Based on my previous experience with Irreversible and upon seeing Enter the Void had a running time of around 2 and a half hours, I dreaded watching it. But once I got past my initial reservations, I found myself drawn into the film. Long movies are only an ordeal when the film is bad. With a compelling story and strong visuals, that's definitely not the case here. While it's certainly not for those simply looking for a bit of light entertainment, if you take movies seriously you'll want to see this film. 4 out of 4 stars.
Posted by Bob Ignizio at 12:01 AM