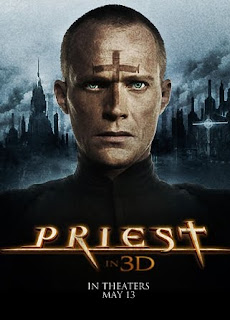 The great thing about vampires is they can save you a fortune on special effects. Just put some fangs in your actor's mouth, and voila. But ever since 1985's FRIGHT NIGHT, there seems to be a rule that vampires have to have some kind of weird physical deformity, at least when they're feeding, that requires make-up and special effects. The “bumpy forehead” look made famous on BUFFY THE VAMPIRE SLAYER, for example. I don't really see the necessity, but at least that kind of thing I can accept. But the “vampires” in PRIEST look like giant eyeless, hairless bulldogs with teeth. What the hell? Why not just call them something else. Of course that's really just nitpicking in a movie as bad as this one.


Paul Bettany plays the Man of the Cloth with No Name, part of an order of ass-kicking holy men with special abilities and training useful when it comes to killing the mutant bulldogs I mentioned earlier. Bettany and his fellow Priests have all but wiped out the vampire menace as our story begins. For absolutely no good reason that I can fathom, some vampires have been allowed to live on reservations. Meanwhile, the Church has collected most of the remaining human population inside dark, heavily polluted cities straight out of BLADE RUNNER, the better to exert their totalitarian influence I guess.
A few hardy humans, including the Priest's brother Owen (True Blood's Stephen Moyer) and his family, live outside the cities in wild west frontier towns. Although the Church assures everyone that the vampire menace has been eradicated, that turns out not to be the case. Owen and his wife fall victim to a vamp attack, and their daughter Lucy (Lily Collins) is taken prisoner by the one human looking bloodsucker in the movie, a former priest played by Karl Urban. Bettany finds out about this from Hicks (Cam Gigandet), the town's Sherriff, and the two set off to rescue the girl if possible, and at the very least to get some revenge.
This is a stunningly awful movie. To describe any of the human beings who inhabit the film as characters would be stretching the term to its breaking point, everyone is so thinly sketched. There's not much of a story, either; just a premise, and not a particularly fresh one at that. It's kind like a dumbed-down version of THE SEARCHERS with bad CGI monsters. Dialog is scarce, although given the quality of what few lines are spoken that's probably a blessing. And the film's attempt to mash together post apocalyptic sci-fi, westerns, horror, and a critique of Catholicism never even remotely gels.
Bettany is the kind of actor who can usually make the most of a bad movie, as he did with his performance in LEGION. Both in that film and here, he delivers his lines in an ominous raspy whisper that makes him sound like a British Clint Eastwood. Urban seems game, too, gleefully waving his arms in the air like an orchestra conductor while his army of vamps destroy a town. Unfortunately such memorably cheesy moments are in short supply.
PRIEST shares the same director as LEGION, Scott Charles Stewart. Anyone who saw that film would think there was nowhere for Stewart to go but up,. If anything, though, he's actually gotten worse. Boring characters, boring story, and boringly executed action scenes are all PRIEST has to offer.
Perhaps to cover up the lack of three dimensional characters, PRIEST is the latest live action film to be converted into 3D for release (as opposed to actually being shot with the process in mind). I saved myself the extra couple of bucks and saw the movie flat, which seems more fitting. If you're smart, you'll do me one better and not bother to watch this in any format. 1 out of 4 stars.
Posted by Bob Ignizio at 12:01 AM