Orgasm Inc. (May 19th at the Capitol Theatre)

[ORGASM INC. screens Thursday May 19th at 7pm at the Capitol Theatre.] 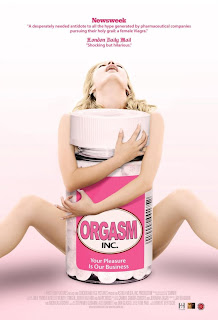 I hear serious debate on so-called global warming can't be held because a chief scourge causing worldwide change to be atmosphere is methane emission from countless meat-farm cattle. In other words...cow farts. And even it's life-or-death, there's just no way to have a straightfaced debate over cow farts.

Running second, seemingly, is that Last Taboo tackled by the corporate docu-expose ORGASM INC., sex problems - mostly but not exclusively female sex problems - and the way the medical-industrial complex strives to profit from them. It's a potentially shocking and shameful investigation that should make us all think hard about...Hey, Beavis! He said "hard!" Hehehehe... See what I mean?

ORGASM INC. is actually a case of biting the hand that feeds. Filmmaker Liz Canner was hired to create erotic therapy videos for a client which began a nine-year involvement in a highly questionable business. Canner's customer Vivus (rhymes with "and Vutt-head" you'd say) is a sexual-enhancement pharmaceutical concern. The concept gives a whole new meaning to the term "big pharma," and don't think that witticism didn't occur to the founder, a cancer survivor named Dr. Virgil Place (who kinda looks like Col. Sanders' city cousin) who has some twee names for private parts and who tested out all his firm's original products on himself (I thought that kind of thing only occurred in superhero comics. Guess I was reading the wrong type of superhero comics).

Now the health industry has "diagnosed" a condition called FSD - "Female Sexual Dysfunction" - meaning an inability for 42 per cent of women to reach orgasm. This sexy sex disease gets hysteria-level coverage in the Oprah-connected media and fashion magazines, usually from doctors connected with drug manufacturers. The race is on to get FDA approval for an antidote, a woman’s orgasm stimulant that will "stimulate" cash flow as Viagara did, and Vivus is one of the competitors.

Drug companies hype up with all sorts of questionable "syndromes" to peddle their nostrums and elixirs (Restless Leg Syndrome, Social Anxiety Disorder, So Desperate She Even Dated Charles Cassady Syndrome -don't worry, this last one is very, very rare, dammit), and Canner questions whether Female Sexual Dysfunction indeed exists at all. Was it a tragically neglected area of male-dominated medicine until sultry blondes like sex-therapy tycoon and talk-show hostess Dr. Laura Berman discovered it? Or a sheer corporate hoax by the drug biz to peddle chemicalgasms (with potentially dangerous side effects).

Ironically it takes a male, British author, Ray Moynihan (who kinda looks like a less happy version of the Crocodile Hunter) to whistleblow the "making of a disease." Moynihan cites data distorted by drug-company PR hacks and marketing whores, that twisted a fictional pathology called FSD out of perfectly normal lack of orgasm brought on by age, stress, bad relationships, living in Cleveland (someone had to say it), etc.

Still, when it gets down to business ORGASM INC. is scary as hell (carrying the PMS metaphor along there). Alarming item: Americans, brainwashed by drug-company ads, consume 45 per cent of the entire planet's prescription drugs, with no measurable improvement in overall quality of life. And the plutocracy is trying to extend Reaganite legislation to the rest of the world that unleashes the corporate drug peddlers worldwide in all their Republican-deregulation splendor.

In a real filmmaker coup, Ms. Canner gets a she-shill at a health trade fair to admit that even she's turned off by the hard sell of her boss' new corporate-medicine gimmick: Cosmetic plastic surgery on the vaginal labia, useless and potentially mutilating knifework, but happily supported by credit-card-taking physicians as a way to make dollars (and don't think our city's big, cool medical campus will be any different). At the end of this interview session the lady rep vows she's going to hunt for a new job (unless the pharmaceutical industry comes up with a drug for her obvious case of Excessive Conscience Syndrome).

I should state somewhere that despite the subject there aren't any visually raunchy/softcore elements. Nonetheless, depending on whom you take with you, and the conversation afterward, ORGASM INC. is potentially the worst date flick since FATAL ATTRACTION. Then again, one can say that about any movie. There will probably be a drug for that too. (3 1/2 out of 4 stars)
Posted by Charles Cassady Jr. at 12:01 AM