On the Bowery (May 6th and 7th at the Cleveland Cinematheque) 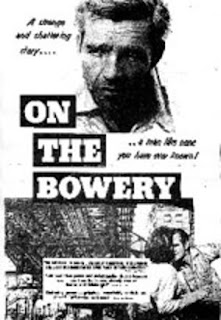 Here's one movie in which the idea that everybody was drunk/stoned on set might not come as a surprise (even less of a surprise than usual). And [insert name of former child star of your choice here] wasn’t even in it...

ON THE BOWERY is mostly forgotten today, but critical raves and the British equivalent of an Oscar for Best Documentary Feature (it won an equivalent nomination in the USA) went to this ostensibly nonfiction feature, even though it shows people going through improv-scripted situations. But, as with many "ethnographic" films (think NANOOK OF THE NORTH especially), the natives are playing themselves in tragically true-to-life routines. They are the chronically destitute, mostly hardcore alcoholics, subsisting on "the maddest, saddest street in the world," the Bowery of New York City. Ray Salyer, a former railroad worker from Kentucky, comes to the neighborhood and learns to bed down at the City Mission. Ray listens to sermons, tries to stay sober, relapses, and gets back on his feet, tentatively, via friendship with Gorman Hendricks, an ex-newspaperman who aspired to be a doctor, and is now a denizen of Skid Row.

Novice filmmaker Lionel Rogosin spent six months observing the Bowery in the mid-1950s and earning the trust of his alcoholic subjects (he also cultivated a friendship with film critic, screenwriter and author James Agee, who died of alcoholism himself at the age of 42 in the back of a taxi) and put together a behind-the-scenes crew who also had serious drinking habits. If not for Rogosin's lens these poor guys who opened up for him would have been utterly lost to the pages of history. Gorman Hendricks - who was once quite prominent socially - died of alcoholism at the tail end of the film shoot, and he wasn't the only participant to do so.

The still-handsome, 40-year-old Ray Salyer, a former US Army sergeant, made such an impact onscreen that he was reportedly offered a lucrative movie-acting contract - which he declined, saying he just wanted to be left alone with the booze. While there's an ugly barroom sequence right out of Hubert Selby Jr. (this was, in fact, contrived by the filmmakers most deliberately), much time passes simply with unsensational sequences of wasted men idling in the streets and doorways, making cocktails out of metal polish and Sterno, and doing any menial jobs they can find to get drunk again. Battered faces on display emphasize these are no actors, although the overemphatic music score does detract a little from what is otherwise a memorable example of a film determined to shed light, factually and without pathos, on the most marginalized segment of society. Though one may debate whether the production has aged well, The Museum of Modern Art named ON THE BOWERY one of the best American films of the 1950s. (3 out of 4 stars)
Posted by Charles Cassady Jr. at 12:01 AM