Monsieur Verdoux (May 20th and 21st at the Cleveland Cinematheque)

[MONSIEUR VERDOUX screens Friday May 20th at 9:45pm and Saturday May 21st at 5pm at the Cleveland Cinematheque.] 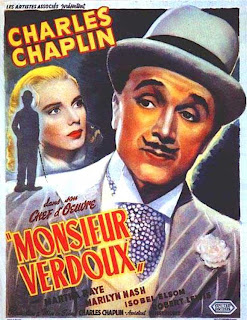 The NATURAL BORN KILLERS of 1947 starred Charlie Chaplin, if you can believe the McCarthyist boycotts, critical catcalls and opportunistic political speeches raised against the silent-slapstick idol when Chaplin appeared here in a startlingly different role, a hero serial murderer long before Dexter or Hannibal Lecter.


MONSIEUR VERDOUX is often said to be based on an idea by Orson Welles, but anyone over the age of facebook should recognize it as the old, oft-filmed Bluebeard fairy tale dressed up for the mid-20th century. Verdoux (Chaplin) is an elegant, well mannered Frenchman who supports his adored, crippled wife and their child by methodically marrying and murdering rich, elderly and-or vulgar women. Finally he meets his undoing when he targets a loudmouthed young lottery winner who proves more difficult to kill than anticipated. The late Martha Raye, better known to the modern hoi polloi as a TV commercial pitchwoman for denture cream (and to WWII G.I.s as a USO entertainer) is a real scream as his most frustrating target.

Not a drop of blood is shown in this polite picture, but the darkness around the edges of the genteel and ultimately sad black comedy still disturbs. The dapper Verdoux defends his crimes as a logical response to 1930s bank failures and fascism and points out that he's just taking a few over-privileged and unimportant lives to sustain his struggling household - while generals and statesmen who slaughter thousands for material gains in war are hailed as great men and patriots.

You're left wondering how much of that is Verdoux self-justifying, and how much is the creator of the beloved Little Tramp speaking his much-troubled mind. The movie failed at the box office, arriving on the scene at the time Chaplin was weathering accusations of a rather creepy and libidinous personal life (guilty) and being a Communist (not guilty; Chaplin even won a libel suit against red-baiting newspaper columnist Hy Gardner but the PR damage was done). Much later - after Chaplin left a hostile America for Europe - MONSIEUR VERDOUX was re-released to the critical acclaim it deserves - or at least, to audiences who learned to embrace serial killers as matinee idols.

I hope the Chaplin estate isn't as eager for the remake-rights dollars as John Carpenter and Wes Craven have been in letting their own properties get rebooted with new actors. No matter what whiz-kid movie brat has it in mind, I don't think I'd care much for a PG-13-rated MISTER VERDOUX, probably starring Russell Brand or Jack Black trying to do in Betty White. Doubtless with a happy ending voted on by audience test screenings. (3 out of 4 stars)