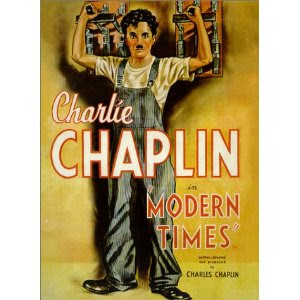 The finest, freshest comedy you can find is, no, not the HANGOVER sequel, sorry, but this vintage-1936 pantomime tour-de-force starring Charlie Chaplin. As with his previous CITY LIGHTS, Chaplin decided not to jump head-first into the sound-film era like so many of his compatriots did. But rather he made - perhaps symbolically, intentionally or not - the last great silent-film feature. There is brief dialogue, and Chaplin's first spoken words on film (which turn out to be nonsense lyrics improvised in a pseudo-European song), but most of this is sheer slapstick-silent virtuosity. Chaplin, billed simply as "a Worker," is a frazzled assembly-line drone who, in the opening moments, suffers a hilarious nervous breakdown on the job (this being the 1930s, it's comedy; today Charlie would just grab a gun and kill everyone). Fired, the Worker goes looking for employment in an absurdist, Depression-era world of shantytowns, waifs, night clubs full of rich folks, strikers, exploitation, discontent and huge machinery. No, wait, that was me in Cleveland, the other day. No, wait, that is Chaplin. Hard to tell, since we're both named Charles, among other regional similarities.

Fabulous stuff, as relevant today as it was back then, maybe even more so, and maybe even more relevant tomorrow - I just read that the Chinese factory in which iPads and iPods are made is rather notorious for the high rate of worker suicide, so meditate on that for a moment. Dig the bit in which Charlie's domineering boss tests out a mechanized feeding gadget to keep the drones at the assembly line during what might otherwise be their lunch breaks. Hilarious, but could never happen in our world, of course; a company wouldn't spring for the cost of the food. In his earlier movies Chaplin's filmmaking was static and flat-on, letting the action unfold before an impassive, seldom-moving lens, though with MODERN TIMES he does indulge in a few brilliant bits of camerawork, such as the tracking shot in which the Worker helpfully picks up a dropped red flag and, wild-eyed and waving it to get the owner's attention, is abruptly and innocently at the lead of a mob scene of angry Communists. Of course, what plays best with college-neighborhood audiences these days is probably the scene in which Chaplin, in jail, accidentally does cocaine. Modern times, indeed.

It may or may not tarnish your enjoyment of this classic that the history books note that Chaplin was sued after the release of MODERN TIMES by Rene Clair's French film studio, claiming that the assembly-line sequence was pirated from Clair's A NOUS LA LIBERTE (yet nobody went to jail over FINDING NEMO vs. SHARK'S TALE, go figure). The lawsuit was dropped when filmmaker Clair, a Chaplin fan, said he would be flattered if his work had inspired the great Charlot. But silent-film fans with long memories have also noted that MODERN TIMES pretty much recycles a quartet of Chaplin's old two-reel shorts ("The Shop," "The Jailbird," "The Watchman" and "The Singing Waiter"). Oh well.

The leading lady was sexy young discovery Paulette Goddard, who for a time was Chaplin's lover and co-star. Chaplin did indeed do audio tests for himself and Goddard to investigate making MODERN TIMES as a true "talkie," but he decided a spoken script just didn't suit his comic rhythms (and preference for a slightly undercranked camera produced the classic slapstick fast-motion effect), and the result was this, a cinematic masterpiece by any definition. (4 out of 4 stars)
Posted by Charles Cassady Jr. at 12:01 AM