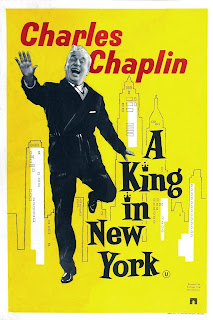 Though far from successful, A KING IN NEW YORK, Charlie Chaplin's scattershot 1957 satire of American life, is a fascinating artifact. I remember it being heavily peddled on Super 8mm format in the great old Blackhawk Films catalogue I grew up receiving, and it always intrigued me that it seemed to be in the part of the Chaplin filmography that most critics didn't want to talk about, the duds. The flick is impossible to separate from the backstory: In real life Chaplin had literally fled the USA where he was once such a beloved entertainer, having been red-baited by McCarthy right-wingers and sleazy news columnists. He even won a libel suit against one of them, somebody called Hy Gardner. As a youth I read Hy Gardner's memoirs (yes, I had no friends), and let's just say I wonder if Glenn Beck is Hy Gardner thawed out of Limbaugh the Hutt's carbon-freeze. Just a theory.


Was Chaplin really a Kremlin sympathizer? Oh I dunno; actors are such psychotic egomaniacal mutants, politically (and otherwise). I can see Chaplin responding to the Depression by developing Marxist and Leninist sympathies. Lots of show folk and so-called artists did (and do). On the other hand maybe there's some merit to the apologists who say the Chaplin-as-communist rumor started out of a misunderstanding: Chaplin was appearing at Allied-powers rallies during WWII and wanted to show support for the USSR, who of course were fighting on our side against the Axis as well. Chaplin got the idea that addressing the Russians as "comrades" was the type of language that engendered friendship and solidarity, and that's what he did. But in the Cold War environment those statements came back to haunt poor Charlie as announcing an affiliation with Stalin (I think Hedda Hopper - a gossip columnist somewhat more remembered today than Hy Gardner - also slimed Charlie in the media over the "comrade" remarks; the Little Tramp's lawyers reactions were so on her about it that Hopper feared Chaplin for the rest of her life. So I've heard).

The "comrade" absurdity, if it was just a gaffe, would have fit right into the comic vibe of A KING IN NEW YORK. Chaplin plays a certain King Shadov, a polite and aristocratic but tres naïve monarch of a small Ruritanian principality. For all his good nature, Shadov has recently exiled by a peasant uprising. He and his queen flee to New York City to announce a utopian peace plan for nuclear power, but no Americans want to listen. Instead society fawns over his celebrity and royalty, inviting Shadov to become a commercial pitchman (at which he fails miserably) and then the humiliated and oblivious star of what is prophetically like a “Reality TV” show (this I would judge to be Chaplin slamming the crudity of “Candid Camera,” which had made its debut in 1948). Ultimately Shadov befriends an ordinary family victimized by the McCarthy Blacklist, and the king thus gets accused of having communist ties himself.

The British-backed production is an uneven mixture of slapstick and Chaplin's own genteel sermonizing, maybe most illuminating for what it reveals about the great comic's own state of mind at this time, as Shadov attends a movie show and is troubled by coming-attractions Hollywood trailers filled with noir violence (“A Killer – With a Heart!”) and sleaze (I swear, one is a direct parody of Ed Wood’s GLEN OR GLENDA, if one could imagine Charlie Chaplin sitting through that).

Even when making a movie that’s practically an act of revenge, Chaplin is so darned polite it’s heartbreaking; compare-contrast to all the angry, iconoclastic left-wing flicks of the EASY RIDER generation that were going to come out just a decade later. Even so, this picture didn't win Chaplin any more friends over here, and the unfounded bad reputation still stains A KING IN NEW YORK; it’s not that bad, really. Nowhere near as excruciating as Chaplin’s ill-fated final feature, A COUNTESS FROM HONG KONG, made in 1967. Both pictures seem to spring from vivid memories Chaplin carried of Czarist royalty and other aristocrats in exile after the rise of Bolshevism. Charlie couldn’t get over the sense of these once-exalted bluebloods, now penniless and rootless, floating around the fringes of society in reduced circumstances, and he was convinced that great comedy and pathos lay in the material. Well, he was half correct here. (2 1/2 out of 4 stars)
Posted by Charles Cassady Jr. at 12:01 AM