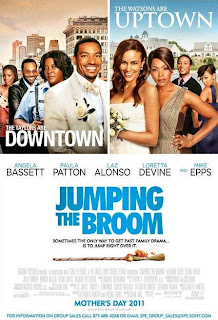 Having reviewed my share of ethnic wedding comedies – including, memorably, one about the clash between a Latino family and an African-American family that featured a priapic goat trying to mate with guests – I cannot fail to commend JUMPING THE BROOM for its taste and humanity.

Few new wineskins are available for the old wine of this brand of matrimonial farce, in which future in-laws converge for a wedding and clash comedically, but director Salim Akil (TV’s The Game, Girlfriends) handles Elizabeth Hunter and Arlene Gibbs’ thoughtful screenplay with poise and a fine visual sense. Whereas too many comedies made for African-American audiences resort to over-the-top slapstick, JUMPING THE BROOM manages to weave cultural, historical, linguistic, economic and religious issues into an otherwise commonplace formula. The contrast in this case is between "uptown" — a wealthy black family living in New England — and "downtown," a working-class black family from Brooklyn.

The betrothed couple “meet cute” after pretty Sabrina (Paula Patton) knocks over Jason (Laz Alonso) with her car. Sabrina, a successful lawyer, has made a bargain with God: she will stop sleeping with inappropriate men if He sends along her soulmate. So she believes Jason is the answer to her prayers. Sabrina’s job offer in China prompts Jason to hastily propose, and a wedding is scheduled at her parents’ sprawling estate on Martha’s Vineyard, a chunk of realty that rivals the Kennedy compound, complete with traditional, Kennedyesque touch football games.


Sabrina, whose character aptly shares the name of Audrey Hepburn’s pampered princess in Billy Wilder’s SABRINA, has lived a privileged life of top schools, servants and swimming pools. Her parents, the Watsons (Brian Stokes Mitchell and Angela Bassett) drink Bellinis and sprinkle their conversation with casual French. Their wealthy idyll is not all it seems, of course; implications of infidelity, financial problems and long-buried family secrets loom over their genteel paradise.


The appearance of Jason’s widowed mother, Pam, played by the reliably divine Loretta Devine, suggests some promising contrast to the dull, denatured universe of the wealthy Watsons, though the comedic potential of her character is not fully realized. Pam, a feisty Brooklyn postal clerk, has anger management issues, and her future daughter-in-law’s eager attempts to befriend her only irritate her (“She sent me a text message! Strike one!”). With her best friend (Tasha Smith), brother-in-law (the ubiquitous and amusing Mike Epps) and Jason’s friends, Pam alights at the estate for the wedding, already loaded for bear. Manipulative and possessive, Pam complains about everything from the chilled shrimp cocktails to the couple’s refusal to perform the family tradition of “jumping the broom,” a nod to the marriage ritual of slave days. (It turns out that the Watsons’ progenitors, unlike the Taylors’, were not slaves, but slave owners).


When Pam becomes privy to the scandalous Watson family secret, she can’t help but blurt out the long-buried truth, nearly derailing the wedding. With this development, the movie takes an unfortunate turn from light culture-clash comedy to Peyton Place melodrama, and yet the interactions and relationships are sensitively written and acted, making the movie more absorbing than you might expect. It’s regrettable that Pam, who uses the Bible to justify her vindictiveness, is made so villainous, since Devine is the funniest member of the cast. Besides, Pam’s resentment of her son’s snobbish future in-laws is somewhat justified; they're pretentious and not much fun.


As written, the engaged couple are a fairly bland pair, but the friends and family members who orbit around them are variously interesting: fortyish Tasha, with her long braids and sanguine demeanor, contemplating whether to give a pint-sized 20-year-old admirer a tumble; haughty maid of honor Blythe (Megan Goode), finding herself attracted to the Chef (exotically handsome Gary Dourdan), a man completely different from her usual, affluent beaus; Jason’s cousin Malcolm (DeRay Davis), hurt because his envy of Jason has cost him an invitation to be best man; Sabrina’s free-living Aunt Geneva (Valerie Pettiford), embarrassing the bride’s mother by singing a sultry “Sexual Healing” at the rehearsal dinner. A formula comedy-drama it may be, but one with some genuinely affecting moments, punctuated at the end by the plaintive tenor of the late Curtis Mayfield.


It’s not as though the outcome of the story is in doubt, but the pathway, threaded with ideas about class divisions, marital commitment, family loyalty, friendship, and the meaning of prayer and forgiveness, is a fairly rewarding one. 3 out of 4 stars.