Ip Man (May 5th and 8th. at the Cleveland Cinematheque) 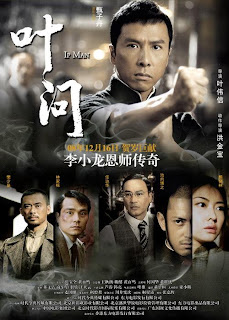 I forget if I read this or was told by someone much better-traveled than myself, but the essence was this: You know how Chairman Mao and other Beijing despots have been able to rally the Chinese masses against the USA from time to time? It's because of an anti-American grudge the Chinese had with US foreign policy during the Second World War. It seems a generation of Chinese citizens can't forgive the fact that America dropped two atom bombs on Japan, at Hiroshima and Nagasaki. The Chinese would rather it have been 20. Or 40. However many it took, if you catch the meaning. But a mere two nukes? The Chinese considered that practically siding with Hirohito.

Point is, there's still a great deal of bad feeling about those little Rape of Nanking and invasion of Manchuria things, and the millions of deaths and atrocities that resulted. Currently, with international aid and sympathy going to a Japan reeling from a nuclear incident that may be its worst disaster of this or any century, it was bracing even for me to behold that the anger persists - or at least seems to - in IP MAN, a big-budget chopsocky franchise. Or am I reading too much into action-entertainment kitsch? Russians came up as bad guys again in SALT, GET SMART!, X FILES: I WANT TO BELIEVE etc. and that was no manifesto reigniting the Cold War, just standard-operational Hollywood lack of imagination.

IP MAN purports to be the biography, embroidered of course, of a real life kung-fu master (and if you stick it out to the fadeout, there is a strong Bruce Lee connection). Setting is Fo Shan, in the 1930s a prosperous community in Canton (China, not Ohio, sorry) styled to be the kung-fu version of what Rucker Park in Philadelphia was to street basketball, a place where the local champions periodically battle each other as well as out-of-town challengers (white-devil confession: I had never heard of Rucker Park until I recently watched a documentary about Philly streetball, so now I pretend I know everything).

In Fo Shan none of the martial-arts masters is more revered - and more secretive - than the ever-polite Ip Man (a proper name, not like Spider-Man), a practitioner of the Wing Chun style, who refuses to enter the martial-arts school biz even though everyone knows of his prodigious skills. I am too much a foreign-barbarian round-eye to appreciate the vibe, but it seems that Wing Chun fighting had a reputation of being feminine in nature, so Ip Man's Ip-manhood is often questioned, as he tries to keep his fighting a strictly private vocation, more Confucian discipline than macho showdowns.

With the invasion by the Rising Sun, Japanese military occupation of Fo Shan drops the population from 300,000 to 70,000 with just a handful of still-operating factories (oh, is that what happened to Cleveland?). His family evicted and destitute, Master Ip takes a gig mining coal, alongside a number of other displaced masters. The arrogant Imperial Japanese commanders also have a bring-it-on attitude towards the Fo Shan kung-fu heroes, and one nasty general has no problem crippling/killing the starving Chinese opponents who take part in their bouts for precious bags of rice. After seeing his old friends slain, the once-placid Ip Man changes his stance on teaching, with both the dirty Japanese and Chinese bandit-bullies from his past as antagonists.

It's certainly odd now watching Japanese retro-style as slavering villains, no less so than they were in Bruce Lee's FIST OF FURY (even Jet Li's remake of that, FIST OF LEGEND, went easy on the Pearl Harbor assassins). But the script, even with the nationalistic anti-Nippon stuff, occasionally rises above the routine, and the widescreen imagery, historic details and action are beautifully composed by director Yip Wai-shun. One especially memorable duel involves sword vs. feather-duster. Donnie Yen's performance as Master Ip emphasizes serenity and good manners rather than kickboxing-through-walls stuff.

Fight choreography - just a bit of wire-stunt, more close-combat in nature - is credited to Jackie Chan's longtime cohort and actor-director Sammo Hung. A sequel to IP MAN followed, which is also showing back-to-back with this at the Cleveland Cinematheque, dealing with Master Ip's postwar career in Hong Kong, and the untimely samurai-bashing only a minor element. Me, I give the movie an extra half-star just in the revenge department. I grew up reading lots of accounts of the Pacific war, especially The Big E, a chest-pounding biography of the heroic Allied aircraft carrier USS Enterprise (the real one), whose men gave Yamato and Tojo grief until one strike by a kamikaze pilot put her out of commission. Forgive if you can...but never forget. Other traumas have long half-lives besides melted-down nuclear power plants. (3 out of 4 stars)
Posted by Charles Cassady Jr. at 12:01 AM