Ip Man 2: The Legend of the Grandmaster (May 5th and 8th at the Cleveland Cinematheque)

[IP MAN 2: LEGEND OF THE GRANDMASTER screens Thursday May 5th at 8:55pm and Sunday May 8th at 8:40pm at the Cleveland Cinematheque.] 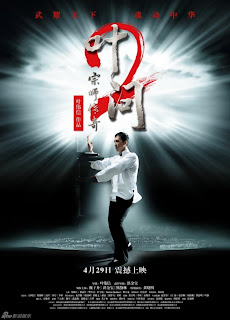 Periodically the entertainment-corporate media will do a big story bemoaning the tragedy of our time: Where are all the next-generation action-heroes? Eastwood, Schwarzenegger, Stallone, Van Damme, Steven Seagal, Bruce Willis are all AARP cover guys now, and Jason Statham is hardly a household name. Where's the next action-hero to be box-office messiah and open DEATH COP VII 1/2 with record numbers on all 24 screens at the multiplex? Where is he? Where is Obama's blue-ribbon committee to look into this outrage? Nice to know all other problems in the world have been solved.


Well, Far East martial-arts cinema, from whence Bruce Lee, Jackie Chan and Jet Li sprung, has been grooming Donnie Yen as the next big thing, so expect to hear that name again, maybe in some crummy remake of RUSH HOUR. He is the star of IP MAN and IP MAN 2: LEGEND OF THE GRANDMASTER (dude was a chess champion as well?), big-budget mytho-biographies of the real-life martial-arts teacher whose pupils included a young Bruce Lee. This installment finds "Uncle Ip" and his small family (a pregnant, ever-disapproving wife is actually described as a stabilizing element that keeps martial-arts heroes grounded) newly arrived in Hong Kong - lovingly recreated in 1950s production design - where the modest hero seeks to open his own martial-arts school in a bad economy (I'm starting to wonder, when was the last movie you saw that took place in a good economy? Bet it starred Shrek). His Wing-Chun school mastery soon acquires the master a following of young hotheads, but the established martial-arts schools carry on in a manner much like triad gangs, demanding "membership" money and bullying newcomer Ip Man because his fighting style is not of their Hung Kuen methods.

But it turns out that, as with the Japan-bashing of the first film, haughty foreign invaders are the real enemy - here British-colonial authorities enforcing a graft-driven culture that turns one master against another. When a massively muscled, hateful, swaggering UK boxing champ enters the picture to prove Anglo supremacy with his brute fist-fighting (against which, interestingly, the more refined Asian opponents seem to have no defense), result, I guess, is history's first Mixed Martial-Arts death match, with Master Ip representing Chinese honor. It's rather amusing that wise Uncle Ip occasionally tells disciples about how the true victory lies in avoiding fighting. When was the last time you saw a kung-fu movie that dramatized that?

Even if you don't care about the imperialism, the history and the ethics, IP MAN 2 still serves up the goods in a least two showstopper fight sequences that are up to the level of the legendary "ladder duel" in Tsui Hark's ONCE UPON A TIME IN CHINA, though Master Ip's underdog ordeal in the big boxing-ring finale is hyper-cornball to the point of parody, like an old 1930s Warner Brothers fight pic gone Cantonese. Really, I picture Sylvester Stallone watching this and going "Oh puhleeeeeeeze!" Still, it's entertaining enough, and with China the world manufacturing center that pretty much owns all of us foreign white-devil-barbarians now, guess one could read the message into it, that Master Ip's people eventually triumphed over their arrogant, uncouth tormentors in more than one arena. Might make it feel at least like justice that one cannot find a single made-in-USA commodity at Home Depot or Wal-Mart, except for useless things like movies. (3 out of 4 stars)
Posted by Charles Cassady Jr. at 12:01 AM