An Interview with Cleveland Filmmakers Dave and Peter Jennings 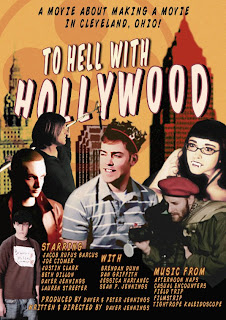 Brothers Dave and Peter Jennings prove that there's more to Cleveland's independent film scene than campy horror movies with their mockumentary TO HELL WITH HOLLYWOOD. Okay, so it's a mockumentary about a director making a campy horror movie, but trust me, it's nothing like the usual backyard zombie epics and camcorder slasher flicks that take up valuable table space at area horror conventions. I recently had a chance to ask Dave and Peter a few questions about their filmmaking experiences so far, and here's what they had to say.

CLEVELAND MOVIE BLOG: The director Dave plays in TO HELL WITH HOLLYWOOD is dismissive of film school, claiming he could learn everything he needed to know faster and cheaper by watching videos on the internet. How did you two learn about filmmaking?
PETE: I’m a photographer by education and by experience so there was a bit of translating those skills on my part into making a picture.  The basic concepts of composition and lighting are fairly similar, but film obviously has the added elements of time and movement.  Dave and I have collaborated in the past on some of his short films, so I have also managed to pick up a bit about filmmaking from that.
DAVE: I majored in Film in college. I learned a lot about working with 16mm film and how to write screenplays there, but as for the rest, I learned from research online, seeing what other people were doing out there without going to film school and for very little money.  Although it is supposed to be a joke that my character learned everything about filmmaking from the internet, it is kind of true that there are a lot of really good resources and references to making films on your own online.
CMB: The usual thing to do for no-budget filmmakers, especially in Cleveland it seems, is to make a shclocky horror movie. Instead you made a fake documentary comedy about making a shclocky horror movie. What made you decide to go that route?
PETE: We actually went down the shclocky horror film route about 4 years ago with a short film entitled “Zombie Rifle”.  It was shot on a Bolex 16mm camera and has all the hallmarks of a B-movie.    It’s currently up for consideration in a short film festival here in Cleveland.  I feel we moved to make a fake documentary to really challenge ourselves by doing something different.  In a way we also wanted to focus on Cleveland as a character in our film, so we did it the best way we knew how.
DAVE: Plus, most of the movies I heard of being made for low budgets or asked to help with in Cleveland were these "shclocky" horror movies, so that was the reason why I made the film about making a "shclocky" horror film, a little inside joke for Cleveland film.  And to be completely honest, a mockumentary was the easiest way for us to make a feature length film for zero money. We didn't have to really worry about great sound, budget, lighting, or getting a boom in the shot. In other words it helped us cheat. 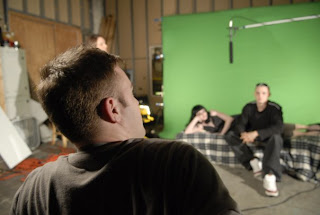 CMB: How much of the characters and basic premise of TO HELL WITH HOLLYWOOD comes from actual people and things you've seen, and how much is just imagination?
PETE: Most of them are an amalgamation of several different people, but I’ll defer that question to Dave.
DAVE: As for the premise; it came out of frustrations and observations by myself regarding film and filmmaking on a low budget here in Cleveland, but also out of my own naivety toward making films. As for the characters; All I can say is that they know who they are. What I meant to say was that all characters are not based on anybody living or dead..
CMB: What were the pros and cons of shooting in Cleveland?
PETE: Given our non-existent budget, it was incredibly difficult at first to find actors and actresses to be in the film.  We had actually started casting in 2006, but had to abandon the project because we couldn’t find enough people who had to the time to do it.  When we revived the film a few years later after making some shorts, we were very lucky to find ourselves amongst friends and family that were supportive of both of us and helping to get a film made here.  Additionally, Cleveland has a great music scene so we had great choices for the film’s soundtrack.  All the bands and artists on the soundtrack were just great to work with.
DAVE:  Like my brother said it was very difficult to find people to act for us. I just made my friends and family act in the film. All the actors in this film were non actors and originally only supposed to be crew members, but when nobody came through to act they all stepped up to the plate. Also, it was very hard for people to take us serious enough to let us shoot in certain locations, that's why the film is set in few locations.
CMB: You couldn't buy a decent used car for what you guys spent making this movie. What were some of the ways you managed to stretch your budget to come out with such a professional looking product at the end?
PETE: Whenever possible, we included real life circumstances into the film.  There’s a scene in which a character is describing a bunch of jury-rigged equipment used in the fake film “Love After Dusk” which is a bit of an in-joke.  In reality a lot of that stuff was actually used in production to save money.  The set in the fake film was actually my photo studio, so we saved a bundle on soundstage costs because I already had access to it.  Any location work was done at our cast or crew’s homes or offices.  The aforementioned bands and artists on the soundtrack are all personal friends of mine so they were all gracious enough to donate the use of their music.
DAVE: Again shooting a mockumentary totally helped in this situation. The equipment the characters used in the film, was what we used. I also researched online ways to make cheap mic booms out of painters poles, or light a scene with work lights from Home Depot. The wardrobe was either old clothes from an attic or Goodwill. Food was potluck and so on... As for editing and some of the green scene stuff, well we just learned how to do it all ourselves. We just worked together to be really creative and it helps when everyone works for free.
CMB: What are your plans as far as getting the movie seen by people?
PETE: We’ve been submitting the film to all sorts of festivals around the country.
DAVE: It's true we have been sending it out to festivals all over the country, but so far no luck. Not even our home town festival accepted us. I won't name which festival, but we are still trying other ones and currently it is up on Vimeo for anyone to watch: http://vimeo.com/19682153
CMB: What's next for the two of you as filmmakers? Do you plan to continue collaborating, or do you each have your own projects you'd like to work on?
PETE: I’m helping produce a documentary about the current rock scene in Cleveland with Dave.
DAVE: In addition to the rock documentary, I will be working with Justin Clark who plays Luke in the film, on writing, producing and directing a TBA short film sometime within the year. We are also starting up a production company called Nickel Plate Productions here in Cleveland.
Posted by Bob Ignizio at 12:01 AM