[I SAW THE DEVIL screens Thursday May 12th at 8:30pm and Sunday May 15th at 8:35pm at the Cleveland Cinematheque.]
Review by Bob Ignizio 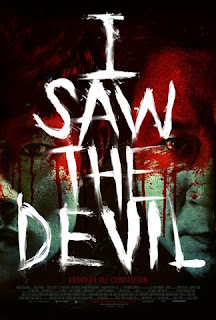 In American revenge films, violence is often a catharsis. There is a clear distinction made between the deaths of “good” people at the hands of punks and psychos, and the retribution meted out by the hero against these evildoers. The hero may suffer great pain and loss while pursuing his vendetta, but in the end there's a sense that justice has been served and some kind of closure can be had.
That's decidedly not the case in Korean revenge films, perhaps best exemplified by Park Chan-Wook's “Vengeance Trilogy” of SYMPATHY FOR MR. VENGEANCE, OLDBOY, and LADY VENGEANCE. Kim Ji-woon's I SAW THE DEVIL (Akmareul boattda) shares similar themes and even one of its stars (Min-sik Choi) with Park's trilogy. As with his riff on the spaghetti western, last year's THE GOOD, THE BAD, THE WEIRD, Kim makes an old formula seem fresh thanks to his strong visual style and a willingness to take his film over the top and beyond the pale while seeming almost casual about it.


The plot concerns Kyung-chul (Choi), a serial killer who brutally murders the fiancée of secret agent Soo-Hyun (Lee Byung-hun). Soo-Hyun vows to track down the killer and make him feel the same pain and fear as his victims before he dies. It doesn't take him long to find his man, but rather than kill him outright, Soo-Hyunn toys with Kyung-chul, beating him within an inch of his life only to set him free and then track him down and assault him again. And again.
As the film goes on, Soo-Hyun seems to almost relish the hunt, and his humanity erodes a little bit more with each assault. All this is conveyed convincingly and with subtlety by Byung-hun's performance. Which is not to say that we ever feel sorry for Kyung-chul. Choi creates a truly memorable monster with his performance here. Banal and nondescript on the surface, but cunning, resourceful and sadistic underneath.
Certainly Hollywood action and horror films have become more graphic with their depictions of violence recently, and there's probably more gore in films like Stallone's recent RAMBO reboot or the last couple of SAW films. The difference is that I SAW THE DEVIL makes you feel the reality and ugliness of its violence.
While it would be inaccurate to say that I SAW THE DEVIL lacks a moral stance or emotional resonance, one gets the sense that Kim Ji-woon is more interested in the look of his film and seeing what curveballs he can throw at the audience. That works a little better in a crowd pleasing romp like THE GOOD, THE BAD, THE WEIRD than it does in a movie like this one where the themes are considerably darker and violence is depicted in all its ugliness and brutality.
Despite occasional moments of dry humor and some excitingly staged sequences, it's hard to say watching this movie qualifies as fun. Kim certainly comes up with some clever twists on the revenge formula, and I SAW THE DEVIL is a well made and solidly acted film. But without anything to say about its themes that hasn't been said before, some may find it hard to justify taking such a rough ride. 3 out of 4 stars.
Posted by Bob Ignizio at 12:01 AM