Hey Boo: Harper Lee and To Kill a Mockinbird (May 20 at 7 p.m. at the Cleveland Museum of Art) 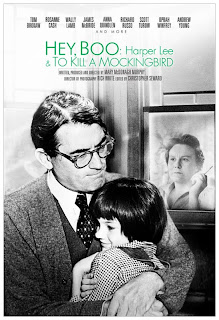 There's this term in publishing, "one-and-done." It refers to the author, typically of fiction, who only completes one book. In the romantic POV, it's a masterwork, after which the author having said everything necessary, gracefully withdraws from the scene. Or...maybe their first book bombs and they never have the heart to yield up a second, or there's a crippling writer's block, or premature death.The most famous one-and-done? Probably Emily Bronte's Wuthering Heights, though cases could be made for Ralph Ellison's Invisible Man or John O'Brien's Leaving Las Vegas. But it's likely that to many readers To Kill a Mockingbird, published July 11, 1960, ranks above all. Probably more schoolkids read it than Twilight (one can only hope), the tale of small-town Alabama in the 1930s and how a 9-year-old motherless tomboy named Scout witnesses a racist miscarriage of justice that enriches and darkens her child's-eye-view of the world, and of her heroic lawyer father Atticus. And, unlike other one-and-dones, this author, Harper Lee, happens to be still very much alive - albeit shy of publicity.


The docu feature HEY BOO is writer-producer-director Mary McDonagh Murphy's love ode to To Kill a Mockingbird, as well as as much of a biography of Harper Lee as can be expected. A parade of bestselling authors, politicians and celebrities go on record about what To Kill a Mockbird has meant to them. Respectful appraisals of the narrative parse the book as small-town evocation, as civil-rights political document, as companion to the nearly flawless motion-picture adaptation which followed (anyone else got bad Bonfire of the Vanities pains like me?). Harper Lee herself stopped giving interviews in the mid-1960s (Oprah Winfrey relates a recent, cordial but unsuccessful bid to lure Lee back on the air), but we hear her voice in archival audio - and perhaps even more remarkably, we get extensive reminiscence from Lee's older sister, who still practices law at age 99. Alice Finch Lee is a character all itself, with all her years etched in an unforgettably mummy-gravelly voice (yeah, laugh all you want, she's still probably in better shape than I will be when I hit 49).

The stranger-than-fiction aspect, of course, is that future world-class author Harper Lee grew up next door to future world-class author Truman Capote, a playmate after whom the kid in the novel named Dill is modeled. A seemingly lifelong, mutually supporting friendship between Capote and Lee ended with her book hitting bigger than his (as a jealous, wicked and spiteful author myself, I wouldn't personally call In Cold Blood a letdown; I'd settle for also-ran if my name were on that one, dammit). It appears a longstanding gossip has arisen that Capote actually did the REAL work on To Kill a Mockingbird - and being without his assistance has kept Lee from publishing anything since (though it seemed she did try to research another project extensively, something that involved a fishing backdrop). HEY BOO denies that conspiracy theory - which I have to say does make a disturbing bit of sense, as most conspiracy theories do - and it also holds Truman Capote up in contrast as a worst-case-scenario of what fame can do to a writer, in this case making Capote a drunken caricature of himself, groping pretty boys (including future author Allen Gurganus) in a disco. In this interp, Harper Lee wisely fled all that (let's hope future documentaries give J.D. Salinger points for being so savvy; they probably won't), and the legacy of To Kill a Mockingbird is all the more for her turning down being a regular on game shows and Dick Cavett. Why is the documentary titled for Boo Radley, the neighborhood boogeyman hunted by Dill and Scout? That's a bit of literary detective work that's too nice to spoil, even for me. (2 ½ out of 4 stars)
Posted by Charles Cassady Jr. at 3:13 PM