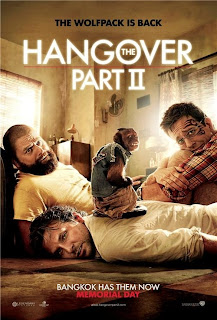 You know those puzzles where the goal is to find all the tiny little differences between two nearly identical pictures? That's kind of what THE HANGOVER II feels like. THE HANGOVER II is set in Thailand; the previous film took place in Las Vegas. In the first movie it was Doug (Justin Bartha) whose marriage precipitated a bachelor party orchestrated by Phil (Bradley Cooper) that goes awry thanks to the presence of obnoxious man-child Allan (Zach Galifianakis); this time it's Stu (Ed Helms) tying the knot. The guys woke up to find a tiger in their hotel room last time around; this time it's a monkey. You get the idea.
It also doesn't help that THE HANGOVER II begins in such a clunky fashion as director Todd Phillips and his co-writers Scott Armstrong and Craig Mazin struggle to get their characters back together, in Thailand, and in a position to do some things they will seriously regret, if only they could remember them. Come on guys, you're basically reusing the script from the first movie with new jokes. This was about the only fresh thing you had to write, and you couldn't come up with anything better?
Look, I'm a horror movie fan. I'm used to plots being recycled over and over, and to be honest I don't necessarily have a problem with that as long as the movie delivers on what its audience wants. In the case of a FRIDAY THE 13TH PART movie, that's dead teenagers killed in creative and gory ways. In the case of THE HANGOVER II it's laughs. Humor is of course highly subjective, but for me there weren't nearly enough gut busting moments this time around. And with fewer laughs, the inherent unlikability of the main characters comes through all the more strongly.
What humor there is to be found in this movie is once again of the gross-out variety. The film being set in Thailand, that means you have to have some transexual jokes. Although these get run into the ground pretty quickly, I have to admit Galifianakis gets what may be the best line in the film when he suddenly realizes that the girls at the strip club have a little something extra. When it comes down to it, though, the groomsmen of THE HANGOVER II come in a distant second in this summer's raunchy wedding comedy showdown to the girls of BRIDESMAIDS. 2 out of 4 stars.
Posted by Bob Ignizio at 12:01 AM