The Great Dictator (May 14th and 15th at the Cleveland Cinematheque) 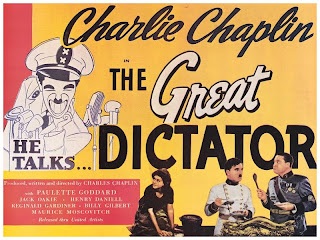 Viewers are used to short-lived satire like EPIC MOVIE or DISASTER MOVIE, which will look terribly out of date just months later. Not exactly great art. But THE GREAT DICTATOR is different. This is satire as art, with indeed silent-era icon Charlie Chaplin - in his first film with extensive dialogue - on a mission to raise an outcry over the screwed-up world of the 1930s (seemingly more screwed-up than today, if that's possible), attacking the international villains of the era, the Third Reich. Between WWI and WWII, a title tells us up front, insanity reigns and humanity "got kicked about a bit" in a suspiciously German-looking country called Tomania.


Chaplin plays dual roles. One is a nameless, hapless Jewish barber, who dutifully (if ineptly) fights for Tomania in the First World War and suffers amnesia. When he recovers he finds all Jews being herded into ghettoes and persecuted, scapegoated for the country's economic woes under the policies of a lookalike, diminutive dictator Adenoid Hynkel (also Chaplin) and his fascist stooges like a weapons-happy field marshall named Herring, instead of Goering ("We've just discovered the most wonderful, the most beautiful poison gas. It will kill everybody!" he exults), and a slithery Propaganda Minister named "Garbitsch" – pronounced `garbage' – a stand-in for Goebbles, portrayed with dry, sepulchral, Snape-like menace by Henry Daniell.


The strutting Hynkel dreams of world conquest, builds palaces, meets with the equally-pompous Brenzini (Jack Oakie, who later complained that he acted in over a hundred pictures but nobody remembered him for anything but this), dictator of a rival empire called Bacteria (think Mussolini's Italy) and gears up for an invasion. Meanwhile the barber's relationship with a pretty Jewish girl (Paulette Goddard, Chaplin's offscreen love at the time) and a lucky WWI friendship with a high-ranking Tomanian military officer lands him in and out of trouble.
Chaplin's feature films tended to more like a series of blackout sketches, and often they indeed repurposed and recycled schtick from his pre-existing shorts. This narrative too is not terribly cohesive, and yet the jokes are done with sublime slapstick, poignancy and insight into the foibles of human nature. The movie doesn't feel like old newspapers, but fresh and urgent. An immortal, non-dialogue dream ballet has Hynkel/Hitler, imagining himself emperor of Earth, dancing lovingly with a globe-shaped balloon - a timeless metaphor for every wannabe conqueror from Napoleon on up (and maybe a few filmmakers who could be named too). Similar is Hynkel’s meeting with Benzini, a Seuss-like burlesque in which the two dictators sit in adjustable chairs and each tries to be taller than the other.
Some critics fault THE GREAT DICTATOR for its climactic speech, in which Chaplin more or less drops the storyline and utterly breaks out of character to deliver an emotional tirade, right in the audience’s collective face, against 1930s totalitarianism in which he pleads for the common man not to fall for the "machine men" plunging the planet into madness. If you can't get to the Cinematheque to behold this piece of eloquence, watch it on YouTube or somewhere. It really belongs among the great oratories (“Soldiers, don’t give yourselves to brutes! To people who despise you!...Don’t fight for slavery! Fight for liberty!”). One wonders why this isn’t as famous as the Gettysburg Address, or at least the stuff Master Yoda says. It should be standard recitation in schools (kind of frightening that it isn’t, if you think about it).
Posted by Charles Cassady Jr. at 12:01 AM