[THE GIRL WHO PLAYED WITH FIRE screens Wednesday May 11th at 5:30pm at the Cleveland Museum of Art.] 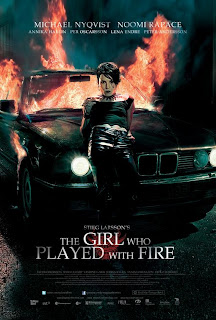 This is the second film based on the best selling “Millenium Trilogy” series of novels by the late Steig Larsson.  The main character is brilliant computer hacker Lisbeth Salander (Noomi Rapace), who despite her petite frame is more than capable of kicking some serious ass.  Lisbeth had one hell of a screwed up childhood.  As a result, she displays little or no outward emotion, although she is loyal to those she cares about.  Admittedly, it’s a pretty short list:  Michael Blomkvist (Michael Nyqvist), publisher of the news magazine Millenium from which the trilogy takes its name, and party girl Miriam Wu (Yasmine Garbi).  The bisexual Lisbeth has slept with both of them, but doesn’t allow either to truly get close to her.

Lisbeth returns to Sweden to tie up a few loose ends from the last film only to find herself framed for the murder of a journalist and his girlfriend.  Soon she’s embroiled in a plot involving white slavery and prostitution, dark family secrets, and an almost superhuman henchman who acts as enforcer for the disfigured master criminal at the root of all this evil.  It’s kind of like a more believable version of an Edgar Wallace Krimi from the sixties (look it up).   Certainly this is a more action oriented film than its predecessor, with plenty of fights, car chases, and escapes from burning buildings.

As with the first film, THE GIRL WHO PLAYED WITH FIRE deals very explicitly with misogyny.  The movie pulls no punches in depicting this theme, and there are undoubtedly scenes that will make some viewers uncomfortable.  You could almost compare this with a rape/revenge movie like I SPIT ON YOUR GRAVE, albeit one with more on its mind than mere exploitation.

Director Daniel Alfredson has crafted a smart, stylish, and exciting thriller with THE GIRL WHO PLAYED WITH FIRE.  It takes some dark detours, but remains entertaining without cheapening its more serious themes.  And perhaps most importantly for a series film, I was left chomping at the bit to find out what happens to Lisbeth next.

The film is subtitled, so if you’re one of those sad human beings who refuse to watch subtitled movies I guess you’ll just have to wait for the American remake (David Fincher is signed to direct).  I like Fincher, but given the constraints of the Hollywood system I just don’t see how his version can possibly be as good.  And for damn sure no one is going to hold a candle to Noomi Rapace’s portrayal of Lisbeth.  So my advice is suck it up and read a few lines of dialogue.  4 out of 4 stars.
Posted by Bob Ignizio at 12:01 AM