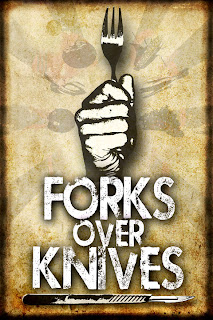 Lee Wilkerson’s FORKS OVER KNIVES, a compelling documentary about the dangers of the meat-heavy Western diet, could be considered the anti-SUPER SIZE ME. Rather than stuffing himself with Big Macs and measuring his expanding waistline and sagging health, director Lee Wilkerson subjects himself to a complete dietary makeover – no meat, no dairy, only plants – and finds his waistline and health risk factors dramatically reduced. After watching the movie's very persuasive argument for a vegan diet, viewers will have a hard time not making a beeline to the nearest Whole Foods to stock up on bok choy, lentils and arugula.

The documentary, not flashy and largely instructional in style — it would not be out of place in a medical school classroom — brings hard science to the increasingly popular whole foods movement by profiling two doctors: Cornell nutritional scientist T. Colin Campbell and Caldwell Esselstyn, a renowned surgeon formerly of the Cleveland Clinic. Both men, now in their 70s, were raised on farms (dairy and cattle), fully believing the prevailing wisdom that milk was “nature’s perfect food,” and meat was a healthful source of protein. Through separate paths and comprehensive research, the two scientists reached the same conclusion: that degenerative diseases like heart disease, type 2 diabetes and cancer — "diseases of affluence" — could be prevented, and in some cases reversed, by the adoption of a whole foods, plant-based diet (the movie avoids the “V” word, vegan). Vivid charts, graphs and data provide the seemingly incontrovertible evidence: the Western diet, now expanding through globalization into China and other countries, is toxic, promoting widespread sickness, skyrocketing health care costs, and early death.


The movie explores the 20th-century origins of the belief that animal products are not only healthy but essential, and targets corporate-funded research and the USDA’s role as a farmers’ advocacy group that is also charged with determining national nutrition standards, a conflict of interest that results in unhealthy school lunches and skewed “food pyramids” emphasizing meat and milk. On-the-street interviews demonstrate the widespread belief that meat is needed for protein and milk is needed for calcium; the film’s scientists refute the prevalent propaganda with seemingly solid evidence. One of the most sobering claims is that casein, the protein found in milk, actually causes cancer. (That conclusion has been disputed by other researchers.) 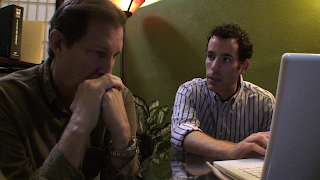 The film bolsters its argument with human stories. There is Joey Acoin, a Tampa landscaper who says, “I live to eat,” a philosophy that has led to diabetes, overweight and dangerously high cholesterol. Joey takes a pharmacy’s worth of medications, including one he must inject every morning into his flabby abdomen, and is sick, sleepless and miserable. After consulting Dr. Matthew Lederman, Acoin adopts the whole-foods diet, and within months is slimmed down, energetic, and free of all medications. San’Dera Nation, a Cleveland diabetes clinic employee, visits the famous Dr. Esselstyn for treatment of her serious diabetes and hypertension, and experiences a similarly thrilling transformation. (Tellingly, her physician employer is horrified that she has stopped taking her medication.) To refute the stereotype of vegetarians and vegans as weak, sallow hippies, the movie presents triathletes, an ultimate fighting champion and Dr. Esselstyn’s strapping firefighter son, the aptly named Rip, who has written a vegan diet book of his own. He chants the mantra “Real men eat plants!” as he shimmies up the fire pole.


Adopting an entirely plant-based diet — and that means not just omitting steak and hamburgers, but also butter, milk, yogurt, fish and, maybe saddest of all, cheese — is by no means easy. The difficulty of relearning eating habits, and the profound sense of loss in giving up so many favorite foods, is addressed only glancingly. San’Dera Nation shows a handwritten journal she kept during the process to deal with her overflowing emotions, and talks about a moment when she was shopping at Walmart and desperately wanting to buy a meatball sub from the store’s Subway. A phone call from the evidently psychic wife of Dr. Esselstyn saved Nation from succumbing to her carnivorous craving.


The film dismisses contradictory evidence and opinion and presents the plant-based diet as a health panacea. Admittedly, the idea that diet is the key to health and longevity — advanced by the father of medicine himself, Hippocrates (“Let food be thy medicine”) — is extremely appealing, as is the promise of subverting the health-care industry and Big Pharma. But nutrition may not be a one-size-fits-all affair, and for every amazing success story, there are people who adopted the vegan diet and found that their health suffered, like the popular vegan blogger Tasha, who defected from the cause at the insistence of her doctor. Veganism, which is often undertaken for ethical and political as well as health reasons, can become a kind of religion, and its heretics are reviled. Ex-vegan blogger Tasha reportedly received violent threats from some vegan readers, who are apparently sympathetic to animals but not to fellow humans.


Throughout the film, people are shown enjoying beautiful, colorful greens-and-grain meals, but the reality is that a sufficiently varied plant-based diet requires a lot of specialized shopping and cooking, a time-consuming and often expensive enterprise beyond the capabilities of some people. (As people living in certain urban areas know, the cheapest and most widely available foods are the ones that are bad for you.) It also takes real commitment to stand apart from the mainstream, avoid favorite restaurants that don’t offer vegan choices, and diplomatically handle barbecues, travel and family holidays. The animal-free diet is ideal for many people, while others experience frustration and constant, gnawing hunger. “A lot of salads and a lot of tears” is how one online commenter described her early struggles with veganism.


The challenge of change shouldn’t deter anyone from adopting the diet recommended in FORKS OVER KNIVES; after all, who wouldn’t want to be winning triathlon medals in their 70s, like Ruth Heidrich, who survived breast cancer in her 40s by adopting the whole foods diet? It also would be nice if animals were spared the barbarism of factory farming and heartless slaughter. But few things are more personal than the food you eat. The best approach is to do your own research, including studies that conflict with the data presented in the film, and listen to your body, and your conscience, to determine what kind of diet works best for you.