Devolved (out now on home video)

[DEVOLVED is out now on home video.] 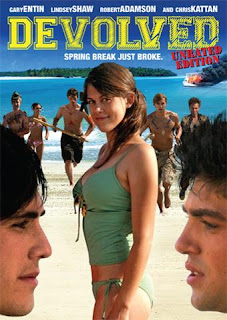 If it weren't for the DVD commentary I would have suspected DEVOLVED had been made by some angry loner who'd been bullied and stuffed into gym lockers and toilets throughout high school, then went to film college, then took dire revenge in comedy with the Vaudeville-broad satire of dumb jocks, cheerleaders, nerds, etc. Brighter for the average outcast youth than just walking into homeroom with a black trench coat and automatic weapon one day and opening fire, right? Right?

But "extras" say otherwise; director John Cregan claims he had a good time as a high- school geek, that the jocks were actually his friends, and that this low-budget frolic bloomed out of his twin desire to do a Lost parody and evoke an insecure monologue he heard from one of his athlete buddies bemoaning that for him maybe high-school football represented a peak in life. The farce - actually more Lord of the Flies than Lost, with a little BROKEBACK MOUNTAIN thrown in - concerns a bunch of California teens cast away on a lush island after the dumb jocks and their cheerleader girlfriends blow up their chartered Spring Break party boat. A very funny somber narrator, reminiscent of Woody Allen's TAKE THE MONEY AND RUN, describes how the "kids" - most of these actors could maybe pass for college seniors, with luck - divide into competing tribes, the "populars" and the "unpopulars." The latter consist of the science nerds, school-newspaper reporters and one cheerleader who made the mistake of weighing more than 110 pounds, and only they think out any sort of strategy to escape. The popular teens, under the domination of an alpha-quarterback, `The Rog,' want to stay on the island forever and establish a tribal kingdom where muscular athletes and their bimbo cheer-team girlfriends always stay on top, and prom night happens weekly. Silly power struggles and manipulations between the two groups go back and forth.

Sounds like one of those extreme-cult goofs, like the similarly island-bound TROMA'S WAR, full of gore, boobs, Toxic Avengers and high-speed bad taste, right? Right? Cregan stops short of that, even though he does throw in occasional T&A nudity and drug gags, though not to the point that they feel like the sole reason for the picture to exist. Humor is generally collegiate but in a good sort of way, with the giddy enthusiasm of the sexy young cast and some on-target zingers in the pitiless burlesque of exaggerated school cliques and stereotypes (The Rog calls his `unpopular' chief nemesis "Grisham" all the time because John Grisham is the only brainy-guy author-type whose name The Rog has been able to assimilate). Special guest star Chris Kattan shows up in a largely inert role - shot quickly in one day, as such cameos go in indie filmmaking - as a wounded football coach who also washes ashore. There's a chance DEVOLVED might show up in cult-classic annals; it depends on whether it's discovered by viewers who were unpopular in high school and enjoy/appreciate the vicarious vengeance - or whether it's rejected by viewers who were popular jocks in high school and are disappointed that Cregan didn't include more toplessness. Hard to tell which group predominates in the real world. As a hardcore "unpopular" I'm not optimistic. (2 out of 4 stars)
Posted by Charles Cassady Jr. at 12:00 AM