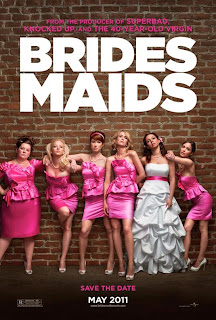 Kristen Wiig sets out to prove that women can be just as crude (and funny) as the guys in BRIDESMAIDS, and to a large degree succeeds. In terms of plot, this is nothing we haven't seen before. You can imagine the pitch: it's THE HANGOVER crossed with a by-the-numbers romantic comedy. That may be a simplification that to a large degree sells the movie short, but it's also reasonably accurate.
Wiig plays Annie, a middle aged woman who is unlucky in love and just about everything else. Her bakery went out of business, her boyfriend dumped her, and her roommates are a creepy British brother and sister. It might seem like making booty calls with the hunky Ted (an uncredited Jon Hamm) would be a ray of sunshine in her otherwise miserable existence, but not only is he kind of an a-hole, he's not very good in bed. The awfulness of her situation is driven home even further when Annie learns that her best friend Lillian (Maya Rudolph) is engaged, and wants her to be maid of honor.
Annie is put in charge of the pre-wedding festivities, and this being a comedy produced by Judd Aptow, things go spectacularly wrong in a decidedly vulgar and hilarious manner. But give credit where credit is due; the screenplay was written by Wiig and Annie Mumolo. The two perhaps don't feel the need to take things as far beyond the pale as guys like Aptow or Todd Phillips, but neither do they shrink away from jokes involving bodily functions and sexual embarrassment. That's right, guys, we no longer have a monopoly on poop jokes.
At the same time that it's trying to make us laugh with gross-out gags, BRIDESMAIDS also gives us female characters with some actual depth and believability. I'll be honest, I often find Wiig overly affected and annoying both on SNL and in some of her movie roles. Here it feels like she's creating a real person for a change. And she's generous enough as a writer to give some of the biggest laughs to her co-stars, including Melissa McCarthy and Reno 911's Wendi Mclendon-Covey. It was also nice to see Chris O'Dowd, star of one of my favorite British comedies The IT Crowd, as Annie's love interest, mild mannered traffic cop Rhodes.
There aren't a whole lot of surprises in the plot, but the performances and effort put into creating interesting characters pay off. I also like the way the film takes some welcome shots the unrealistic expectations about glamorous weddings so many people have, thanks in large part to other romantic comedies. The film ultimately pulls its punches a bit in that respect, but the message still gets through. And bottom line, BRIDESMAIDS is just funny. 3 1/2 out of 4 stars.
Posted by Bob Ignizio at 12:01 AM