Blank City (May 13th at the Cleveland Museum of Art) 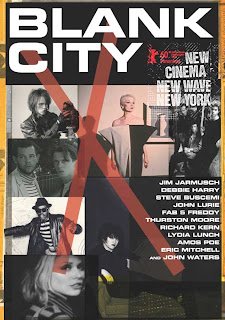 Every weekend there seems to be another multi-media arts festival in Cleveland. They’re starting to blur all together for me now, these Weapons of Mass Ingenuity International Independent Fusion Cool FestExpoCon, each promising an explosion of “creative arts” turning this city’s failing fortunes around via avant-garde video, underground/alternative bands, stilt-walkers and other dubious foundations for a new Northeast Ohio economy. These affairs must be particularly easy to stage, given the miles and miles of empty storefronts, dead factories and foreclosed real estate available to the VIP artists. Guess you can tell I’m no great fan.


The documentary feature BLANK CITY captures and, in its punk-nostalgic way, romanticizes this concept of creative foment amidst the grit and dirt of urban-recession life, a type of vibe so close to the poseur hearts of Clevelanders-aspiring-to-be-New-Yorkers. It assembles an oral history of the very DIY “No Wave” cinema movement in the decaying lower Manhattan of the 1970s and early 80s. Certainly this was a notable confluence of talent – a veritable Harlem Renaissance, of, well, principally white punk-ass kids, many – like Akron native Jim Jarmusch – drawn to Gotham by a practically primal urge to create their own visions, in the skeeviest part of the Greatest City in the World – the decaying Lower East Side, where roach-ridden Manhattan apartments could be had for only $50 a month, and the lines of junkies in the streets looking for fixes were matched by lines of street-level filmmakers looking for a local camera wizard who offered sync-sound Super 8mm and 16mm gear at unbeatable prices. The No Wave (a term coined by a Village Voice critic who championed these micro-moguls) included filmmakers Amos Poe, James Nares, Nick Zedd, Susan Seidelman, Lizzie Borden, Richard Kern and Scott and Beth B; actors Steve Buscemi, Anne Magnussen, Rockets Redglare and Patty Astor; and musician-actors Fab 5 Freddy, Deborah Harry, Patti Smith, James Chance, Lydia Lunch and John Lurie.
While 1970s New York City unintentionally cultivated an image as a crisis-ridden, rotten Big Apple (financial default, a notorious blackout-looting spree, rampant drug crime), these nonconformists, more or less overlapping the prevalent punk-rock scene - as well as ascendant rap and hip-hop, though music stuff gets pushed to the margins by movie stuff – shot their cheapo films guerilla style and screened in ersatz galleries and exhibit spaces, with no career agenda, no thoughts beyond the next endeavor. Indeed, Lurie and a buddy once rented an editing suite from the Maysles Brothers, took a lot of amphetamines, and cut their movie in one 24-hour burst. Take that, 48-Hour Film Project! Everyone seems to help out everyone else, in a spirit of healthy camaraderie right out of a chorus line of RENT, quite unlike the movie biz now - or, one suspects, even then.
A surprise villain of the piece: Doomed street artist Jean-Michel Basquiat, part of this happy bunch . Once Basquiat hit paydirt, joined with Andy Warhol (who was a sort of precursor to the No Wavers, but not exactly a role model) and proved that one could make a fortune in the corporate art world, we’re told, things were never the same. Financial success and prestige of Jarmusch’s STRANGER THAN PARADISE – finally, a No Wave movie that actually played in theaters, not warehouse squats – also loosed the serpent of commercialism upon this creative Eden. AIDS and the Reagan-led NeoConservatives also presented an unfriendly cultural climate, just at the time Zedd, Lydia Lunch and others turned the comparatively staid No Wave into something called the Cinema of Transgression, with pan-sexual horror farces such GEEK MAGGOT BINGO and THEY EAT SCUM which existed for no other reason than to outrage and shock.
I must say, even I hadn’t heard of most of the movies discussed here – YOU KILLED ME FIRST, THE WILD WORLD OF LYDIA LUNCH, THE OFFENDERS, BLACK BOX, ROME 78 - though I did see Seidelman’s SMITHEREENS in college and had heard of Jarmusch’s debut, PERMANENT VACATION. And while SMITHEREENS was surprisingly watchable, I strongly suspect that the tantalizing, brief clips from most No Wave pics are probably more enjoyable than undergoing them in their entirety. There is also a conspiracy theory, uttered without challenge, that the end of the No Wave came when greedy NYC real-estate developers and right-wing government meanies under Mayor Ed Koch deliberately deluged the city with heroin, to get rid of the undesirables and gentrify the Lower East Side. Yes, because we all know how sober and stable musicians-artist-filmmakers are normally, right? President Trump may someday have to answer to these charges.
Still, it seemed like it was quite a time, and BLANK CITY, for all its mythmaking, allows one to get the post-punk No Wave experience without the fatal mugging or being shot by the Son of Sam on the way back to the subway station. For those morbidly curious, Beth B, Nick Zedd and Jarmusch seem to have best withstood rigorous decades of avant-harde living. Rest of these trendy folks could pass now for Parma matrons. Beware, Gen Y, in your graduation caps and gowns and tribal tattoos, you’re next. (3 out of 4 stars)
Posted by Charles Cassady Jr. at 9:39 AM