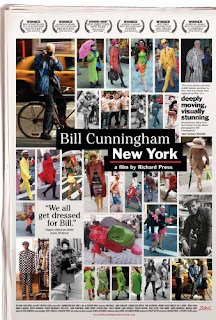 Cunningham himself is ever smiling (even when visibly irritated with assistants and the documentary filmmakers), tack-sharp and cheerful, seemingly with no secret agenda or deep pit of psychological torment that he fills via his circulating amidst the rich and famous. He's just a nice, modest, churchgoing Catholic fashionista doing what he adores, and hence a complete enigma to intelligentsia (one is reminded of how analysts are equally puzzled by Ronald Reagan). Rather sadly, you get the sense that gentlemen of this caliber just aren't around much anymore. If they were in greater numbers, the media would be all the richer for it. In more ways than one, AnselAdamsdammit. (3 out of 4 stars)
Posted by Charles Cassady Jr. at 12:01 AM