The Artist (a short film by Brandon Baker) 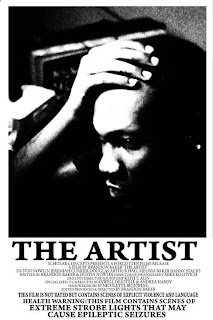 Northeast Ohio filmmaker Brandon Baker has a new short film. The Artist depicts a put upon tattoo artist whose anger and frustration build to a violent climax, or so it would seem. As in the previous short from Baker that I've seen, The Accident, this is a visually striking black and white film that does a good job telling its story with very little dialogue. In fact, it's when the characters do speak that the film runs into a little trouble. Some of the lines just don't sound like the kind of things real people say to each other, and as is often the case with really low budget films like this, the non-professional actors come across a bit stiff and awkward. That said, the atmosphere and emotion that Baker is trying to convey in his film comes across loud and clear. You can check the film out for yourself by following this link: http://vimeo.com/22146059. 2 1/2 out of 4 stars.
Posted by Bob Ignizio at 12:01 AM