American Grindhouse (May 19th at the Capitol Theatre)

[AMERICAN GRINDHOUSE screens Thursday May 19th at the Capitol Theatre at 8:40pm. Presented in association with The Cleveland Cinematheque.]
Review by Bob Ignizio 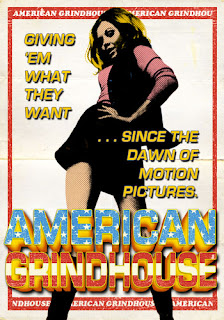 As exploitation move legend Herschel Gordon Lewis explains in the documentary AMERICAN GRINDHOUSE, the best way to achieve success as an independent filmmaker is to figure out, “what kind of film is there that the major motion picture companies either will not make or can not make,” and then fill that need. From the silent era up until about the early eighties, the need Lewis and other filmmakers like him filled was the natural human desire for sensationalism. In short, sex, violence, and anything else seen as taboo at the time.


The exploitation film industry was born as a natural response to the restrictive Hollywood production code instituted in the 1930s. Although the quality of these films was often low, their cultural impact could be substantial. Believe it or not, there was a time when the only way some people could get information about sex was by attending “birth of a baby” movies like MOM AND DAD and buying the souvenir book peddled by “Elliot Forbes” (there was a whole troupe of Elliot Forbeses) after the show. Even at their worst, there was always a fun air of carnival hucksterism in the way these films were promoted and presented.
Eventually the production code was abolished, allowing more violence, nudity and mature subject matter into mainstream films as long as they were submitted to the now ubiquitous MPAA ratings system. The success of films like JAWS put the final nail in the coffin as Hollywood realized they could make a fortune off of slick, big budget versions of the same schlock the exploitation filmmakers had been filling their bank accounts with for years.
Director/co-writer Elijah Drenner aims for a wide and easily accessible portrait of his subject, but doesn't delve very deeply. At times, that gives AMERICAN GRINDHOUSE the feeling of one of those VH1 psuedo-documentary specials where celebrities offer their oh-so valuable insights into pop culture. Like, for instance, every time John Landis is trotted out to say something. Nothing personal against Landis. He's made some good movies and seems like a genuine fan. I just think the movie should have spent more time with primary sources who actually lived and worked in the exploitation era like H.G. Lewis, Ted V. Mikels, Jack Hill and Fred Williamson and less with authors, fans and experts like Eddie Muller, Landis, and Kim Morgan.
At least some of my problem with AMERICAN GRINDHOUSE is that I'm already steeped in exploitation movie lore. For the average movie goer who probably never heard the term “grindhouse” until Quentin Tarantino and Robert Rodriguez used it as the title for their 2007 double feature, this documentary provides a decent introduction to the subject. It's light and breezy, with plenty of film clips and trailers to entice further exploration, and Robert Forster does a fine job with the narration. And if you still want to know more, check out the more in depth documentary MAU MAU SEX SEX which focuses on legendary exploitation producers David Friedman and Dan Sonney. 3 out of 4 stars.
Posted by Bob Ignizio at 12:01 AM