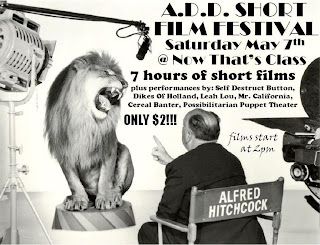 Do you like movies, but feel that modern feature films are just too darn long? Then the first ever ADD Film Festival might be for you. The event takes place on Saturday May 7th at Now That's Class, located at 11213 Detroit Avenue in Cleveland, OH. The festival starts at 2pm and goes until 2am. Admission is a mere $2 for the entire day.

The event was put together by Steve Barrett and features more than 50 short films from all over the world. Sure, the festival is heavy on Ohio made films, but there are also entries from Oregon, Minnesota, Iowa, and even India, Italy, and Portugal. Running times range from one minute up to just over a half an hour. The films have been broken into 5 separate programs with performances by the The Possibilitarian Puppet Theater and local musicians Mr. California,  Cereal Banter, Leah Lou and the Two Left Shoes in between. After the films conclude at 11:20pm, Dikes of Holland and Self Destruct Button will each play a set.
Posted by Bob Ignizio at 12:01 AM