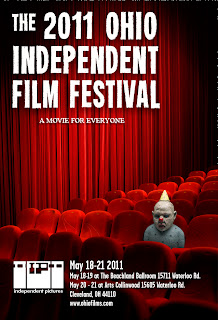 Yes, you could travel to the Cannes International Film Festival in France. But then you'd stand a good chance of being mistaken for a child-kidnapper, losing your luggage, ordering a plateful of oysters you can't eat, and running afoul of an egomaniac director played by Willem Dafoe. It happened to Mr. Bean.

Instead save gasoline, stay home, spare the oysters and support the locals, with this week's Ohio Independent Film Festival (OIFF), an annual tradition since 1994.


The OIFF has had a long-term engagement on Cleveland's West Side in the Cleveland Public Theatre and Gordon Square - but, as we all know, a certain mental illness affects Clevelanders to the extant that there are East Siders who would more likely hop the next airliner to France rather than drive toward the setting sun over the Great Wall represented by the Cuyahoga River and visit the Detroit-Superior Corridor. For their benefit, this year's OIFF for the first time convenes in two adjacent East Side locations, Arts Collinwood, located at 15605 Waterloo Road, and the Beachland Ballroom, just down the street at 15711 Waterloo Road.

Be there and you will meet (and even get to network with) film folk from inside and outside Ohio. Most of the shorts, features, live-action, animation, special presentations and filmmaker bows take place for a $10 admission. The films, screening on celluloid and projected video, hail from all over the country and indeed the world. But festival director Bernadette Gillota tries to give special recognition to movies with strong regional ties.

Attractions begin Wednesday night with a 7 p.m. collection of shorts that includes new entries by established local film practitioners such as Ted Sikora (whose Akron-made mortal-guy-tries-being-a-superhero spoof HERO TOMORROW came out well before KICK-ASS and SUPER) and Tiffany Lauffer (CHRISTMAS AT MAXWELL'S). An independent feature from East Coast filmmaker Jose Cruz, CLOSE-UP, follows at 9:30 p.m., a drama which eschews character names in detailing an alcoholic wannabe actor trying to straighten up between Christmas and New Year's.

On Thursday night at 7 p.m., Maryland-based Heather Taylor's documentary BREAKING THROUGH THE CLOUDS tells the story of the first Women's National Air Derby, an aviatrix milestone of 1929. The program of shorts that follows at 9 p.m. includes Ohioian Jay Johnson's THE HANDYMAN, a macabre take on the Anthony Sowell serial-murder case. The 7 p.m. Friday night shorts showcase has films from the USA mixing with entries from the UK, Australia and Brazil. It's followed at 9 p.m. by CURRENCY, an Indiana crime drama with an ambitious eight-decade storyline arc.

Busiest day at the OIFF is Saturday, May 21, kicking off at 1 p.m. with ONE REVOLUTION, a documentary about a handicapped athlete's attempt to ascent Mount Kilimanjaro in a special wheelchair. All-Ohio short subjects at 3 p.m. include a WWII period drama by Mentor's longtime local-film hero Bill Johns. The 5 p.m. slot is reserved for two short-feature documentaries: Adam Garcia's FIGHTING FOR ANSWERS, about three families stricken in an ill-understood "cancer cluster" community, Clyde, Ohio; and LOCKED OUT, about the progress of a modern-day miners' strike in Boron, California. MURDER MACHINE!, at 7 p.m., pits an overtaxed small-town sheriff against a psychotic drifter, and it's the latest from director Rich Yarber and his Twisted Spine Productions, an enthusiastic collective of "micro cinema" enthusiasts specializing in gore and mayhem. For the closing feature, 9 p.m.'s THE HELLWORTH HAUNTING, Clevelnd State University graduate Justin Ciminero went back to good old 16mm Plus-X BW celluloid film in a Bolex for an old-school double-bill type thriller about a cub girl reporter finding paranormal Bad Stuff bound to a double-murder case.

For a full schedule of the Ohio Independent Film Festival, check out the website at www.ohiofilms.com for the complete itinerary and descriptions of all shorts, features and upcoming events blending Arts Collinwood and the OIFF. You can also phone (216) 651-7315 for more information.
Posted by Charles Cassady Jr. at 12:00 AM