[I AM opens in Cleveland Friday April 29th exclusively at the Cedar Lee Theatre.]
Review by Bob Ignizio 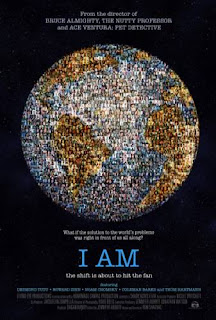 Directing several blockbuster films (among them ACE VENTURA PET DETECTIVE, LIAR LIAR, and BRUCE ALMIGHTY) made Tom Shadayac a wealthy and seemingly happy man. Then a serious injury, followed by a difficult recovery, made him reconsider the path he was on. Shadyac asked himself two questions: what's wrong with our world, and what can we do about it. The result of his efforts to answer these questions is the documentary I AM.
I do admire Shadayac for trying to find a way to do something more productive than make another middle of the road Jim Carrey comedy. I even share some of his sentiments about how we as a species could stand to cooperate with each other more, and maybe stop to consider whether we really need a second Hollywood home (not a dilemma I've personally had to deal with, but Shadayac has) when that money might be better spent helping those less fortunate. And then Shadayac connects himself with electrodes to a dish of yogurt and tries to affect it with his thoughts, and he loses me.


See, Shadayac feels the need to support his message with science, even if that means resorting to science of a rather questionable sort. So the movie spends a great deal of time with the folks at the HeartMath Institute where they talk about how the heart can predict the future and is just as important to thought as the brain. Quantum mechanics misinterpreted throughout the film, as well, which is pretty much par for the course whenever practitioners of newage (rhymes with sewage) want to give their theories the sheen of science while they simultaneously pick apart the evil “scientific establishment” when it doesn't agree with them.
Just as frustrating as the amount of pseudo-scientific fluff is the under-use of more substantive interview subjects like Noam Chomsky and Howard Zinn. But I imagine their take on Shadayac's questions would have been concrete and practical, where he seems more interested in feel good notions. For a guy who started his journey by asking questions, he doesn't ask many more once he gets rolling. I mean, I'm open to the idea of psychic yogurt, but before I accept such a miracle, I might want to delve a little more deeply into other possible explanations. Maybe call in Penn & Teller or the Amazing Randi for their thoughts on the matter.
Regardless of my issues with some of the nonsense put forth in his film, I ultimately can't say I have any antipathy towards Mr. Shadayac. He seems like a nice guy, and his movie isn't alarmist, strident, or preachy. He basically just says we should, as individuals, maybe stop being so selfish and help people around us once in a while. We're not going to solve the big problems in the world, but there are plenty of little things we can do to make the world better. Eventually those little things add up, and who knows what effect that might have?
If the movie is to be believed, Shadayac not only talks the talk, but walks the walk. He's sold his Hollywood mansion and moved into a mobile home (a nice mobile home, to be fair, but still a pretty big step down). And instead of making another lowbrow Hollywood comedy that would have been a near guaranteed hit, he made this rather noncommercial documentary. It's not great, but it's well made, reasonably entertaining, and has its heart in the right place. 2 1/2 out of 4 stars.
Posted by Bob Ignizio at 12:01 AM