Hoodwinked Too: Hood vs Evil 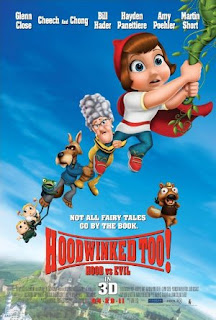 Kids won’t remember that Anne Hathaway and James Belushi voiced two lead characters in HOODWINKED five years ago.  So it won’t matter to them that Little “Red” Puckett is now voiced by Hayden Panetteire (from NBC’s Heroes) and Kirk the yodeling woodsman is played by Martin Short.
Actually, grown-ups probably won’t miss Anne and Jim either, given that HOODWINKED TOO: HOOD VS. EVIL boasts a cadre of other credible talking talents.  Glenn Close returns as Granny Puckett and Patrick Warburton is back as Big Bad “Wolf.”  Corey Edwards is still Twitchy, the over-caffeinated squirrel.  Cheech and Chong play two “little pig” hench-swine, Wayne Newton guests as a singing harp, and David Alan Grier cameos as a bridge troll with four arms and an “Oh no, you di’nt” hip-hop attitude.
Red, Wolf, Granny and Twitchy are four secret agents in the Happy Ending Agency (HEA)—a Brothers Grimm CIA analog whose mission is to ensure that all fairytale characters live happily ever after.  The CGI cartoon’s opening gambit has the team summonsed to a Bates Motel-styled gingerbread house to rescue Hansel and Gretel from nasty witch Verushka (Joan Cusack).  But Red isn’t part of the operation; our plucky heroine is away training with the secret “Sisterhood.”  Wayward Wolf and squirrel not only let the witch escape with her juvenile captives, but with Granny, too—and the recipe for a magic Norwegian Black Forest Truffle.
The headstrong Red and impulsive “wild card” Wolf must learn to cooperate if they’re to free their matronly mentor from the clutches of evil.
Mike Disa—who directed the sequel for Blue Yonder—has fun putting Red and Wolf through their paces—from woods to Big City—by riffing on scenes and dialog from iconic action movies: Wolf escapes an exploding motor home a la Mel Gibson in LETHAL WEAPON 2.  Then he and Twitchy eject from an inferno like Bruce Willis in DIE HARDER.  The villain from the first movie, Boingo the Bunny (Andy Dick), turns up in a SILENCE OF THE LAMBS-inspired asylum interview.  And cronies repeatedly prey on Red’s impetuousness by calling her a chicken—a thematic nod to BACK TO THE FUTURE PART II.  Other bits borrow from (or pay tribute to) PSYCHO, SCARFACE, SPIDER-MAN, and KING KONG.
But again, what’s extraordinary is that children won’t spot these cinematic signposts (save perhaps the “Use the Force!” edict from STAR WARS).  It’s as if Disa and co-writers Cory and Todd Edwards (who scripted the original) crafted their SHREK-ian fable with moms and dads in mind—and it works, for the most part.  The biggest laughs at our showing were for a banjo-plucking goat who repeatedly finds himself in harm’s way.
As Hansel and Gretel, Bill Hader and Amy Poehler channel SNL’s “Hans and Franz” (with perhaps a little Frances McDormand from , yaaah).  Cusack is competent as the conflicted witch, even if it’s hard to not think of her yodeling STORY cowgirl, Jessie, whenever Verushka speaks.  2 ½ out of 4 stars.
Posted by Peter M. Roche at 12:01 AM