City Lights (April 29th and 30th at the Cleveland Cinematheque) 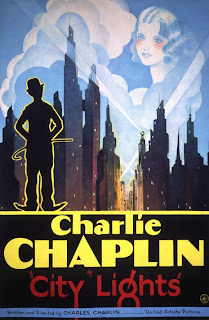 These days a filmmaker gets a certain heroic acclaim by actually shooting on celluloid rather than ubiquitous digital video. But Charlie Chaplin, in 1931, was ahead/behind the technological curve more bravely than that. As an expert mime artist, his career built on nonverbal humor, Chaplin, with the luxury of owning his own studio and having total business-creative control, simply chose to ignore the existence of talkies altogether, and he kept making silents - albeit ones with recorded music (Chaplin’s own compositions) and brief, brilliant bursts of sound effects - eschewing the bulky microphone gear that severely restricted camera movement (ironically, perhaps, as Chaplin’s plainly-shot, set-bound business never indulged in fancy camerawork anyway). Chaplin had the popularity and artistry that allowed him to get away with it splendidly with the retro-technology. Me, I still used MS-DOS word processors long after Windows had taken over. And I’m this close to being a homeless tramp. Where’s my legend status?

Charlie’s Little Tramp running character (anyone but me remember when IBM used the Tramp as a computer advertising pitchman? Sorry, MS-DOS brings back memories) stars in CITY LIGHTS, “ a comedy romance in pantomime” released in 1931, after a prolonged and rather troubled production history, none of which is evident onscreen. The classic mix of slapstick and poignancy has the LT smitten with a blind flower girl (who obliviously dumps water on him as he adores her). The LT saves a suicidal millionaire in the midst of a marital crisis from suicide and had a taste of the high life (since we associate sound movies with the Depression, it’s a bit difficult to keep in mind the worse-than-today-if-that’s-possible economic climate in which this premiered), and the sightless flower girl gets the mistaken idea that her suitor is indeed a wealthy “gentleman.” Periodically banned from his high-society pal - who can only accept the Tramp as his friend when he’s drunk - Chaplin’s hero thus tries assorted big-city odd jobs for the girl’s sake, to keep up the ruse and to pay for her medical treatment. The Tramp works at a variety of thankless tasks, including street sweeping, amateur boxing, entry-level web design, (just seeing if you were paying attention) to handle his sweetheart’s ruinous expenses, including an overdue rent bill - of $22. Ready to kill yourself now?

Don’t just yet, as CITY LIGHTS is really one of those must-see-before-you-die masterworks that will indeed make you feel that silent film was real film, that some of the true magic and mystique vaporized off the cinema as THE JAZZ SINGER got everyone yakking. Watch the famous boxing-match sequence, a hilarious affair made up of loooong slapstick takes, in which the slapstick business goes on and on amazingly without a single edit - and it doesn’t end the way you’d expect, either. When the film does reach its conclusion, director Chaplin cuts it at just the right emotional high point, the way few visual storytellers have dared to try before or since. [SPOILER ALERT] When I first saw CITY LIGHTS I thought the finale was a fairy-tale happy ending, but now that I’m older and more pessimistic it’s clearly as ambiguous as hell; the formerly-blind girl realizes that her benefactor is a penniless street person. What does she do after the sudden fadeout? Accept him - or throw him out, like everybody else has? I think Chaplin knew exactly what he was doing with that. This is true motion-picture artistry, and recalls what George Bernard Shaw (a guest of honor at the UK premiere) said, that Chaplin was the only genius working in movies - guess the dude hadn’t worked his way up the alphabet to Keaton. (4 out of 4 stars).
Posted by Charles Cassady Jr. at 12:01 AM