Amateur Night: Home Movies From American Archives (May 1st at the Cleveland Cinematheque)

[AMATEUR NIGHT: HOME MOVIES FROM AMERICAN ARCHIVES screens Sunday May 1st at 6:30pm. Filmmaker Dwight Swanson will be on hand to introduce the film and answer questions afterward.]
Review by Bob Ignizio 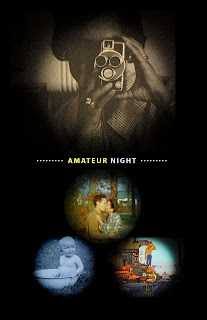 In a time before everyone had high def video cameras built into their phones, even before camcorders, people who wanted a visual record of their lives had to use actual (8mm) movie film. For the most part these home movies were family mementos that hold little interest to anyone not actually a part of the family (or a really dedicated voyeur, perhaps). That's not the case with the films collected together by Dwight Swanson in AMATEUR NIGHT: HOME MOVIES FROM AMERICAN ARCHIVES.
This is an amazing time capsule that includes films from as far back as 1915 and as recent as 2005. It begins with a great color clip of kids in Halloween costumes. I couldn't find the date, but I'd guess it's from sometime in the fifties or sixties judging by how many of the costumes look home made. I'm a sucker for anything to do with retro Halloween, so I was immediately won over. But there's a lot more here, including rare footage of a Japanese WWII internment camp in Wyoming, a great segment of a black house party in Pittsburgh circa 1961, an absolutely amazing film of the “Last Great Gathering of the Sioux Nation” in Nebraska in 1934, and even some of Alfred Hitchcock's home movies. 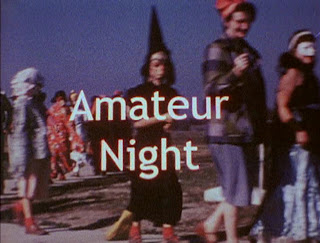 The skill level of the filmmakers varies a quite bit, as you would expect, but overall these are reasonably well shot movies. Certainly very little of the motion sickness-inducing shaky BLAIR WITCH style camerawork that Hollywood seems to think represents how ordinary people operate a camera. Some of the films appear to have been damaged slightly, or just faded a bit with age, but this seems to add to, rather than detract from, the viewing experience. As much as this is a great piece of historical preservation, it's also a great piece of entertainment. 4 out of 4 stars.
Posted by Bob Ignizio at 12:00 AM