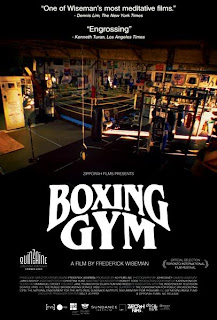 “It’s viewed as a violent sport, but everyone here is super-nice and friendly. If anyone comes in here acting like a tough-ass, they wouldn’t last very long.” So says one of the habitués of BOXING GYM, the latest documentary from the estimable Frederick Wiseman, which takes us inside Lord’s Boxing Gym in Austin, Texas. Wiseman’s unobtrusive camera reveals the quotidian rhythms and casual camaraderie among the men and women, some of them amateur and professional fighters, who work out at Lord’s, an uncommonly friendly, low-key training facility.

This is Wiseman’s 38th documentary for PBS; the filmmaker, now 81, created and perfected a non-directive technique of planting himself and his camera in the midst of an institution – a high school, a battered-women’s shelter, the American Ballet Theatre and the Paris Opera Ballet, the Idaho state legislature, a welfare office, Army basic training – without imposing any outside narration or point of view. The result is a vivid, unvarnished portrait of human behavior within a social milieu. His first film, the controversial 1967 TITICUT FOLLIES, took viewers inside an asylum for the criminally insane, the Massachusetts Correctional Institution in Bridgewater (the title was taken from a talent show performed by the inmates).


“I approach everything with an open mind,” Wiseman told Kenneth Turan in the LA Times. “What I do is a response to what I’ve seen, not an attempt to prove a preexisting thesis. Human behavior is so complicated, and my goal is to begin to suggest that complexity.”
Wiseman’s non-directive style, helped in BOXING GYM by the excellent cinematography of John Davey and Wiseman’s incisive editing, means that the subject is presented as it is found, without enhancement. Unlike Wiseman’s 2001 DOMESTIC VIOLENCE, which followed the stories of several women abused by their husbands, BOXING GYM offers no particular conflict or melodrama. It’s less a story than a colorful visual poem, riffing on the repetitive pwock pwock of gloves hitting bags, the dance of fists and feet, the tossing of the medicine ball, the rhythms of the conversations about defeats and hopes in the ring. The film has no particular social message, except: This is what it’s like inside this particular boxing gym.
Lord’s Gym, a shabby but utilitarian warehouse space appointed with Sugar Ray Leonard, Mike Tyson and Evander Holyfield posters and battered thrift-store chairs, does not advertise, but its reputation is known among boxing cognoscenti and spread through word of mouth. Lord’s has a seriously athletic but surprisingly family-friendly atmosphere, with aspirants of all ages, races and sexes coming to work out. Dads bring their sons to get them started, young mothers bring their babies, who wait patiently beside the ring. For those who are able and motivated, boxing appears to be an equal-opportunity sport. According to the gym’s owner, there’s even a woman of 68 who trains there. He marvels, “She hits the speedbag better than any of my pro fighters.”
Boxing is inherently dramatic, which is why it has been the subject of movies as old as GOLDEN BOY and as recent as THE FIGHTER. And it is, by nature, aspirational. Fighters are forever trying to get back in shape, get back in the ring, beat the guy who beat them last time. Real-life boxing stories are quieter and more mundane than ROCKY , and some of them are captured by Wiseman’s camera. Men trying to find the time to train, with the competing demands of work and family. “My life isn’t the same without boxing,” says one young hopeful contender. “I even love getting hit – the buzz you get.” Another boxer, talking about overcoming fatigue, says, “That’s what boxing is: pushing through.”
BOXING GYM has a meditative rhythm and arresting images that are like the finest artistic street photography come to life. Wiseman filmed 90-plus hours of footage, which he edited down to 91 minutes. But even at that length, BOXING GYM seems repetitive. The lack of drama requires that the viewer appreciate the film less as a story than an abstract essay on the poetry and humanity of a seemingly brutal sport.
Posted by Pamela Zoslov at 12:01 AM