Winnebago Man (October 16 and 17th at the Cleveland Cinematheque) 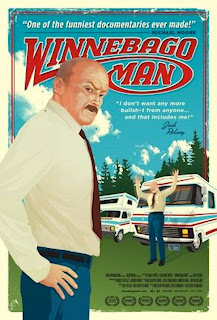 Winnebago Man is a fascinating documentary that chronicles director Ben Steinbauer’s search for viral video sensation, Jack Rebney. For years, a collection of outtakes from a promotional video Rebney had hosted for the Winnebago company were passed around on VHS. In the clips, Rebney goes on several tirades, swearing at assistants, getting frustrated over his lines, and freaking out about the abundance of flies on the set. If you thought Bill O’ Reilly’s “Inside Edition” outtakes were insane, you haven’t experienced the wrath of Jack Rebney.


When YouTube emerged in 2005, Rebney’s outbursts gained new life, reaching an even larger audience who dubbed him “the world’s angriest man.” In an age of internet celebrities, Rebney had become a hit. But who was this man? After finally finding him in the California wilderness, Steinbauer realizes that Rebney wasn’t too pleased with his internet stardom.

Rebney, who had been a journalist before doing the Winnebago videos, had always imagined a more important legacy for himself. We find that Rebney is a very well spoken man, who’s very interested in politics and the world around him. Of course, we also find that he’s still got a really foul mouth. He’s also easily frustrated, and when Steinbauer gives him the chance to express his political views, he struggles to effectively communicate his thoughts. It gets worse when Steinbauer tries tap into his personal life - Rebney closes up, and becomes extremely difficult. Ironically, he begins to look like the man in those outtakes.

Feeling burnt out, Steinbauer shifts gears. Instead of trying to pick Rebney’s brain, he decides to introduce him to his fans. They take him to San Francisco, where he attends a sold-out festival that’s screening his Winnebago footage, followed by a meet & greet. This is the most revealing part of the film, as Rebney’s heart starts to shine through (well, as much as is probably possible). The screening allows him to see that people genuinely enjoy his clips because they help to lighten up their days. In turn, he’s able to show his fans that he’s not just some freak show.

This terrific film touches on an interesting chord: what is the effect of the notoriety on these often unwilling YouTube sensations? How do they feel about being the butt of a joke? Maybe, like Jack Rebney, they have more to offer the world than just a few laughs.
Posted by Anonymous at 12:01 AM